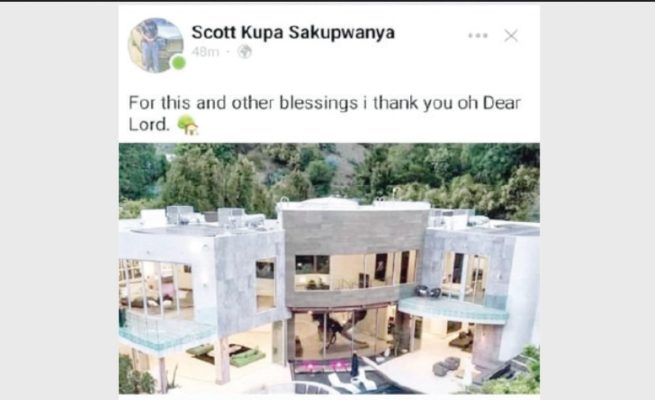 That is the message from businessman, Scott Sakupwanya, after social media claimed he had built a mansion similar to the one owned by billionaire businessman, Bill Gates.

“It’s all false,” Scott told H-Metro when the newspaper enquired whether there was any truth to the social media claims.

The claims were made in a “fake” Scott Facebook account, which appeared to give the impression the businessman was boasting about realising his dreams of building a mansion that matched the one owned by the American businessman.

Bill Gates, once the world’s richest men, has a mansion, worth about US$125 million, and is reported to be one of the best homes in the world.

“The mansion is automatically a technological piece of art,” a website once noted.

“As expected, there are very many features to look forward to seeing on this Estate.

“The massive house is located near a lake in Madina, Washington. It is an enormous mansion which is known as Xanadu 2.0, and it lies in 66,000 square feet and has a library with various manuscripts which are about US$8 million.

“Gates’ house has a spectacular out of this world interior décor.

“Hard to imagine the house has seven huge bedrooms, 6 kitchens, 24 bathrooms of which 10 of the bathrooms have bathtubs.

“The home has a reception area that accommodates more than 200 guests, having a 22-foot screen on the side of the wall, adjacent to that wall there is a 6 feet lime huge fireplace.

“There is an under the terrace glass wall of which one can safely swim, with underwater systems installed just to enjoy the stay in water while swimming.

“Bill Gates’ house interior is incredibly creative. According to CBR Online, the house has different garages in different locations that accommodate over 23 cars in his estate.

“One of his favourite garages is created and built of steel and concrete which can hold up to ten vehicles. There has been an artistic concept used where the concrete looks somewhat broken.”

THE BEST HOMES OF CELEBRITIES

The mansion, which is located at Lake Como, dates from the 18th century, and its value is more than 100 million dollars. George Clooney seems to like the way of life in Italy. That’s the reason he decided to purchase this house. The mansion is like a small hotel since it has 25 rooms, an outdoor theatre, a large swimming pool, and an oversized garage for Clooney’s cars and motorbikes.

The American architect Peter Bohlin made the designs for Bill Gates’ luxurious mansion, which is located near Lake Washington in Medina, Washington. The house is mainly known as Xanadu 2.0. The construction began almost in 1990, and the house was first inhabited in 2005. The value of the house is more than 100 million (US$125m) dollars. The architectural style of the house belongs to the Pacific lodge. The mansion expands to more than 6.000 square meters and has a large swimming pool, gym, private library, and many other facilities. In general, it is the dream house for anyone of us.

The house was previously owned by Samuel Goldwyn, a filmmaker. Its value is 30 million dollars. However, it is not a typical house. It is a mansion that holds back to 1934, and after some improvements, it became an incredible property with seven rooms and ten bathrooms.

Tiger Woods House on Jupiter Island includes a large golf area, which is its main characteristic. The property also has an outdoor pool and a spa. The internal space includes two master bathrooms, three bedroom suites, one master bedroom, a gym, a wine cellar, and an elevator. The whole property costs almost 50 million dollars.

The house is known as Villa Tragara. The design and the construction belong to Kinka Usher. It offers an amazing view of the Pacific Ocean. The house has two pools, a tennis court, and several fireplaces. The surrounding is really beautiful with incredible flowers and trees. The value of the house is 45 million dollars.