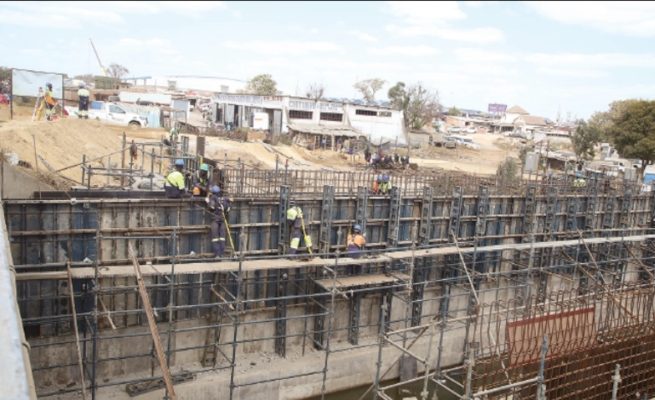 THE multi-million dollar Mbudzi traffic interchange being built in Harare will go ahead as scheduled after a company trying to claim ownership of land being used lost a High Court bid to block the project.

The judge presiding over the case ruled that the Government had now made a reasonable compensation offer to Metropolitan Development (Private) Limited, the company seeking to stop the project.

The world-class traffic interchange, being constructed under the Emergency Road Rehabilitation Programme (ERRP), is expected to eliminate congestion at the point where two major highways meet the Beitbridge-Harare national highway, with the traffic circle that was deemed adequate a few decades ago now totally overwhelmed.

But Metropolitan Development (Pvt) Ltd had sued the Minister of Transport and Infrastructure Development and Tefoma Construction, the consortium contracted to build the interchange, seeking an order compelling the Government to offer adequate compensation or alternative land of equal value elsewhere.

The company also wanted an order barring the Government from continuing construction on any part of the 3,86ha without Metropolitan’s consent.

Metropolitan was offered US$562 913 compensation for the portion needed of the 8 062 square metres it owns on Subdivision A of Marshlands of Delft of Hopely. But it still pursued its interim and final order. The compensation includes the land and any buildings on that land which will have to be demolished as the interchange is built.

An interim order is only ever issued when there is a danger that the applicant would suffer irreversible harm in the gap between the interim order, where the other side is not heard, and the final court decision made after both parties have argued the matter before the court.

Justice Owen Tagu dismissed Metropolitan’s application for the interim order on the basis that what Metropolitan wanted in its final order had already been achieved, and so even if the matter was pursued to the end, there was “nothing to argue for on the return day”.

The judge also noted that even if the second part of the relief sought was granted, the application for a temporary stop to the work, there was nothing to anticipate on the return date as the ministry had already, though belatedly, offered the company US$562 913 as compensation for the land.

Metropolitan became aware in October last year of the Government’s intention to replace Mbudzi Roundabout with a proper interchange of several bridges and ramps that would allow continuous traffic in each of the three roads and that this would involve some of its land.

The company then filed an urgent application in the High Court on December 23 last year. However, the hearing did not proceed because the company and the Transport Ministry agreed they would negotiate a possible settlement.

Under Zimbabwean law, the Government can take over land needed for the public good, but outside rural land being set aside for resettlement, has to offer fair value in compensation for the land and any improvements, such as buildings. Even the resettlement option requires fair compensation for improvements, usually worth more than the land itself.

The Mbudzi roundabout is at the intersection of Simon Mazorodze Road, Chitungwiza Road, and High Glen Road. These feed traffic from western Chitungwiza and many old and new suburbs into Harare city centre, as well as the heavy national and regional traffic on the Harare-Masvingo Highway.

The widening of the Beitbridge-Harare-Chirundu Highway, plus its reconstruction and rehabilitation, is a critical component of the North-South Corridor and huge delays as this highway met the major southern urban roads in Harare would negate many of the advantages won, as well as jamming traffic crossing the highway.

Five local companies are at present rebuilding, widening and upgrading the Harare-Masvingo-Beitbridge portion of the highway and so far more than 313km of the rehabilitated highway have been opened to traffic.

Once this section has been done, the same system will be used for the Harare-Chirundu portion, except for the final and complex road winding down the escarpment into Chirundu which has been done and was funded by Japanese aid.