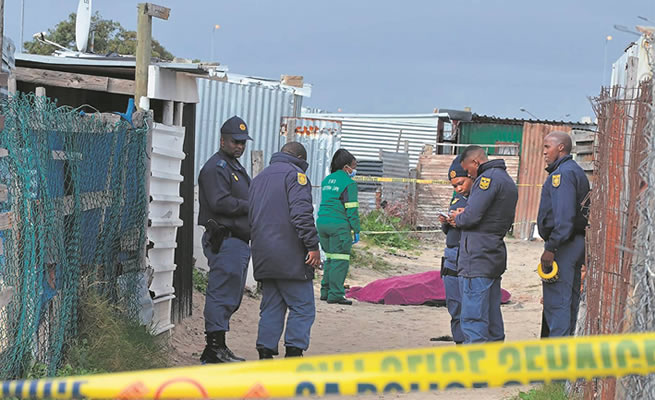 RESIDENTS of Lockdown squatter camp were horrified when they woke up to find the body of a burnt man on the street on Friday, 19 August.

Two more burnt bodies were found with their hands tied at their backs in nearby Freedom Farm in Delft, Cape Town.

The neighbour of the victim found in Lockdown said he was killed in front of his girlfriend.

He said men knocked at his door and demanded a bag he had taken from them.

They allegedly dragged him out of his shack and beat him before setting him alight.

“We called him Rasta. He had been living here for just over a month with his girlfriend.

“It’s not his shack but he was asked to look after it by the owner, who is in the Eastern Cape,” said the neighbour.

Another resident said they heard screaming but didn’t want to go out because it was very dark.

The area, established during the Covid-19 lockdown, has no electricity.

“At night here, you cannot see anything because of the darkness. It’s dangerous to even walk to the shop, so when someone screams, no one dares to step out to check what is happening,” he said.

“The next morning, we found the body on the street with a burnt tyre on it.”

Police spokesman Captain Frederick van Wyk said the man was believed to be the victim of a mob violence.

“A 35-year-old man was assaulted by a group of unidentified people and burnt. We have reason to believe that the victim was killed during a vigilante attack. No arrests as yet and investigations continue,” he said.

Meanwhile, cops are investigating a double murder case after the bodies of two men, aged 20 and 42, were discovered in an open field in Freedom Farm.