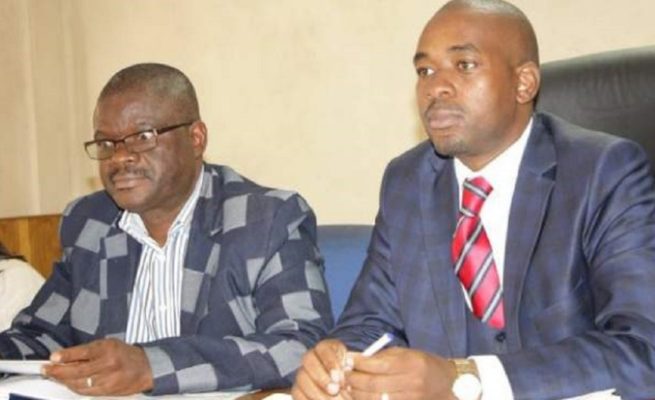 Opposition MDC-T president Senator Douglas Mwonzora has made sensational allegations that some members of the standing committee want to take the party and its properties to the Nelson Chamisa led Citizens Coalition for Change amid a fallout between himself and party chairman Mr Morgan Komichi.

Mr Komichi is said to be interested in challenging for the party presidency during the elective congress whose dates are yet to be announced. Addressing party members in Harare last week, Sen Mwonzora said the congress will be held in terms of the MDC-T constitution with the date set to be announced after district and provincial structures are set up, likely during this week. However, while he did not name any individuals, Sen Mwonzora said he needed new team leaders at the standing Committee.

He warned members to be careful not to vote into the presidency, someone who will take the party to what he said was ‘some president in another party.’ Sen Mwonzora said he could not imagine party headquarters, Harvest House, being painted yellow, in an apparent reference to the Nelson Chamisa led Citizens Coalition for Change whose colours are yellow.

He claimed the party did not do well in recent elections including the by-elections as a result of poor teamwork and said members must give him (during Congress) a better team to work with.

“The reason why we didn’t do well in recent elections, while others are saying it’s because of the president, I am saying we lost because of the team, give me a better team. The duty of a party leader is to think and I have shown that I can think hence the reason why I am saying I need a better team. I need a team that will stay together in good and bad times, when we fall, we must fall together, same as when we rise, not when we fall someone then assists our enemies to finish off the party. We no longer want such people in the system, that is our golden rule number one, talk about yourself when campaigning not to try and get votes by bad-mouthing others.

“Rule number two is that we don’t want leaders who, after being voted into office, will take the party, take Harvest House (party headquarters) and give it to some other president in another party. We fought for that building to safeguard it in the name of Morgan Richard Tsvangirai. I cannot imagine Harvest House painted in yellow, that’s nada,” said Sen Mwonzora.

He said he will soon be announcing Congress dates.

“We will be going to the Congress which will be held in terms of the MDC-T constitution. After we are done with our structures, I will announce the Congress dates which will be a month earlier so that those who want to campaign for whatever position, will have a full month to do that. There is no position that is reserved for anyone, every member is free to contest any position including that of the president,” said Sen Mwonzora.

Party chairman Mr Komichi, who neither denied nor confirmed that he will square off against Sen Mwonzora for the control of Harvest House, said it was pure propaganda for someone to think that anyone would transfer Harvest House to another political party.

“Harvest House will never be for sale. It is the citadel of opposition politics and the High Court clearly said that it belonged to MDC-T. No one has any legal power to transfer party property, so to claim that some people want to do that is just being a propagandist,” said Mr Komichi.

He said since all positions are up for grabs, he will only make up his mind on whether to contest for the same post he is holding or go for a new challenge, including the presidency, after Congress dates have been announced.

“We are servants of the people, if members feel I should contest for the presidency and there is enough following, I can not say no, but remember being nominated is not good enough, you must be sure that you have support from the people,” said Mr Komichi.

Mr Komichi poured cold water on reports of a fallout between himself and Sen Mwonzora.