Zacc implored the National Prosecution Authority (NPA) to do “justice” to the case. 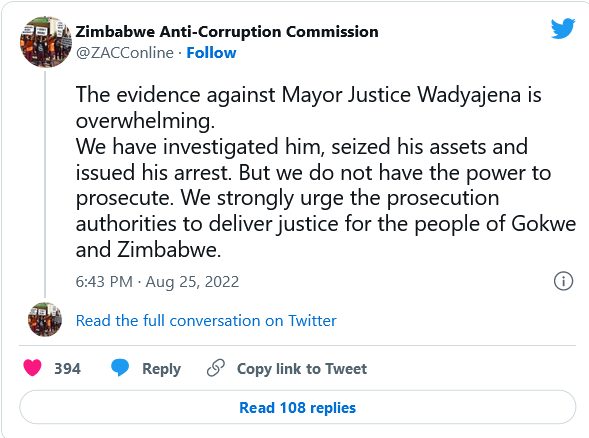 They were granted $200 000 bail each by Harare magistrate Stanford Mambanje on charges of fraud and money laundering involving US$5,8 million.

In a statement on Twitter yesterday Zacc said: “The evidence against Mayor Justice Wadyajena is overwhelming. We have investigated him, seized his assets and issued his arrest. But we do not have the power to prosecute.

“We strongly urge the prosecution authorities to deliver justice for the people of Gokwe and Zimbabwe. We have uncovered the following evidence against Madyajena: US$5,834 million stolen from public funds, trucks and trailers worth US$1,480 million. Zimbabwe deserves justice.”

But Zacc spokesperson John Makamure disowned the statement saying it had been uploaded by someone who had not been authorised.

The initial statement was temporarily deleted on Twitter to correct a spelling error of Wadyajena’s name, which had been written as Madyajena before it was reposted.

However, the tweet with a spelling error was later reposted.

“We have pulled down the tweet, so there is no issue there,” Makamure said.

“This is an internal matter which needs not to be publicised. Whoever uploaded the statement on our Twitter handle did so without authority from the superiors. The statement does not represent the position of Zacc as an institution.”

Harare magistrate Barbara Mateko last week issued a warrant of search and seizure for 24 vehicles among them a fleet of trucks and super cars belonging to Wadyajena.

The court ordered Wadyajena and his co-accused to surrender passports and title deeds for their properties and remanded them to September 8, 2022.

But addressing party supporters in his constituency earlier this week, Wadyajena said he did not care even if the State seizes all his properties.

Wadyajena was not picking calls when NewsDay sought his comment last night.

Both prosecutor-general Nelson Mutsonziwa and NPA spokesperson Angeline Munyeriwa were not picking calls.

But Judicial Service Commission secretary Walter Chikwanha told NewsDay that the judicial officers would deal with the matter diligently.