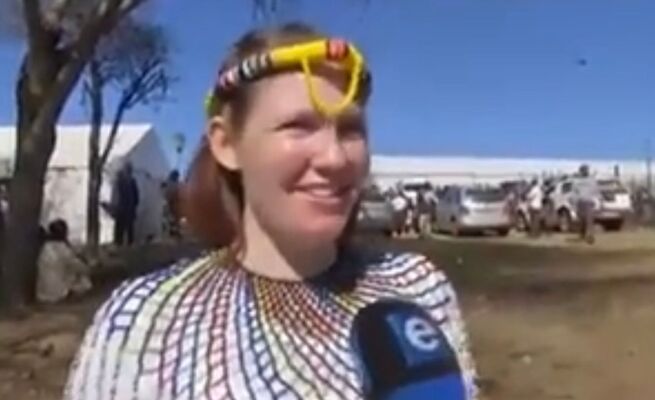 As King Misuzulu KaZwelithini took the throne at the weekend, a woman identified as Amelia said she was there in hopes that the king would take her as a wife.

A white Gauteng woman shot her shot at the reigning king of the Zulu nation, King Misuzulu kaZwelithini, saying she wants to be his “first white Zulu queen”.

As King Misuzulu took the throne at the weekend, the woman identified as Amelia said she was there in the hope that the king would take her as his wife. This means that King Misuzulu kaZwelithini has been given a chance to have tlof tlof with a white woman.

Last month, the Zulu King was accused of abusing drugs and alcohol as well as loving too much tlof tlof to the extent of committed incest and has a child with one of the half-sisters in the Swazi royal family where his mother, the late Queen Mantfombi Dlamini Zulu, came from.

This was after Prince Mbonisi Zulu, his brother, had attempted, through the courts, to get the king’s coronation legally cancelled.

“In other words, the allegations that I have committed incest with my sisters from the Royal Palace of Kwakhangelamankengane is fiction. It is also untrue that I have a child with the daughter of my mother’s sister from the Royal Family of Swaziland. Secondly, those related to alleged alcohol and drug abuse,” the king said.

However, Misuzulu’s ukungena esibayeni (the entering of the kraal ceremony) took place in the kraal built in KwaKhangelamankengane Royal Palace in Nongoma, KwaZulu-Natal.

“I heard the king is going to come here today, so I wondered maybe he’s looking for a wife. I don’t know if he’s going to watch this, then he must just know I am here. I want to be the first white queen of SA, the first white Zulu queen,” she told eNCA at the ceremony.

The woman’s request received some warm responses online, with many praising her for not “beating around the bush”.

Here is a snapshot of what social media users had to say:

@SiyaMax: “You’ll be surprized how these white queens love our culture and all”

@ZZinyana: “That’s why I like whites they don’t beat around the bush they go straight to the point”

I saw her and took her a picture, she was so friendly and very beautiful. She can be a good queen this one😂😂😂😂😂😂😂😂 https://t.co/VpKD4vnGpT pic.twitter.com/DeUHytD6Jx