Dynamos’ curse continues to haunt them after suffering a 1-0 defeat to rivals CAPS United in the Harare derby played on Sunday afternoon.

Denver Mukamba who is on loan from the Glamour Boys scored the solitary goal in the second half which condemned his parent club to fourth loss of the season.

Dembare were the first to make an attack in the 8th minute, but Blessing Moyo’s effort went over the bar. Both teams went on to retain equal possessions which saw them missing several chances. Mukamba could have sent the Green Machine in front four minutes before the break, but he failed to beat the keeper in a one-on-one situation.

The second half had a cagey start, and players from both sides failed to keep the ball for a long time.

Mukamba, however, broke the deadlock on the 68th minute.

Makepekepe survived a late scare in the last minutes of the game when the ball was cleared off the line after it had hit the inside post.

The result means CAPS move to 12 points in the 6th position while Dynamos remain rooted in the relegation zone with just three points.

At Barbourfields, it was another exciting show for Highlanders after beating Shabanie Mine 3-0 in front of a sizable crowd.

Donald Makuwe grabbed an early advantage for the visitors in the 12th minute before Peter Mudhuwa equalised with a beautiful back heel five minutes to halftime.

Bosso dominated play in the second period and were rewarded with a goal by Newman Sianchali in the 57th minute which gave them the lead for the first time. Brian Banda sealed the win in the 80th minute.

Tshilamoya move to second with 17 points while Shabanie are remain outside top ten with seven points.

Elsewhere, Bastos Chihwowa scored straight from a corner on the 75th-minute mark to hand Chapungu a 1-0 victory over Herentals. 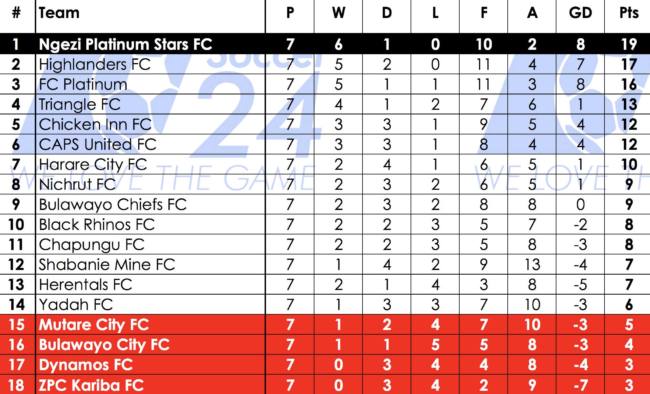