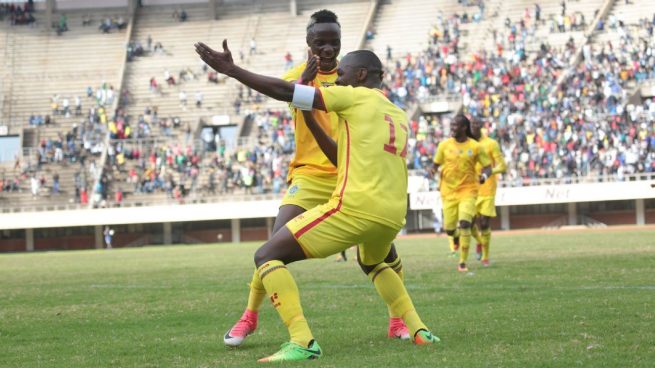 TEN-MAN Zimbabwe earned a vital full set of points in Kinshasa to extend their lead on top of Group G of the 2019 Afcon Qualifiers, winning 1-2 against DRC last night.

Captain Knowledge Musona was sent off a few moments after he doubled the lead which had been secured by Ronald Pfumbidzayi in the first half.

The hosts dominated the opening minutes, forcing the Warriors to play more defensive as they drew every man back into their half. The first real chance of the game came on the quarter hour mark when Cedric Bakambu’s header was tipped over by George Chigova.

Zimbabwe, nonetheless, took the lead against the flow of play in the 21st minute when Pfumbidzai finished off Khama Billiat’s freekick.

Knox Mutizwa could have added another seven minutes later but failed to reach the ball in a one-on-one situation with the keeper. Billiat also followed with another dangerous effort on minute 35 but was denied by the keeper from a set piece.

The game went to the break with the visitors in the lead. DRC had a similar start in the second half, dominating and creating some good opportunities which were easily dealt with by the Zimbabwe defence.

The Warriors continued to rely on counter attacks and it paid off in the 69th minute when Musona doubled the advantage.

However, the captain received a second yellow card five minutes later and Zimbabwe were left with a man short.

Musona will miss the next game in Harare.

A late goal in the added time courtesy of Yannick Bolasie’s header gave the home team a consolation as it ended 1-2 in favour of the away side.

The Warriors remain on top with seven points while Congo Brazzaville and DRC follow on second and third positions respectively. Liberia are anchoring the group with one point.

England-based defender Tendayi Darikwa played his first competitive game for the Warriors since getting a passport to represent his motherland. Zimbabwe host DRC in Harare during the week in the reverse leg.

“Congratulations to the Warriors for such a gallant performance. As Zifa we are proud of the boys and the coaches and I’m sure the whole nation is proud as well. Let us come in numbers when we host DRC in Harare as we continue with our march to the Afcon finals. We will certainly make it,” he said.