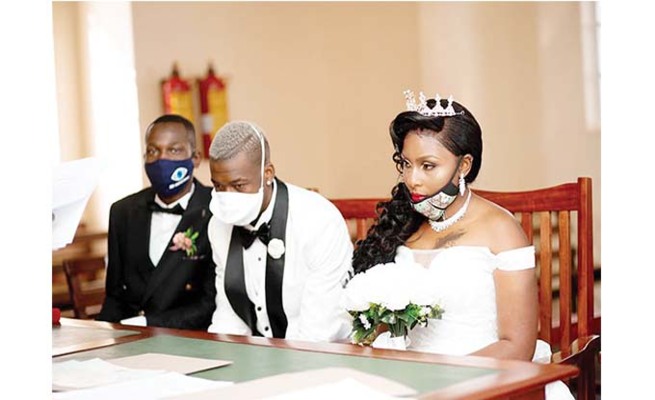 TURKEY-based Zimbabwe Warriors defender, Teenage Hadebe is officially off the market after he recently wedded his sweetheart, Mitchell Matambanashe.

It seems the Turkey domiciled towering football defender is putting to good use the break from his club, Yeni Malatyaspor who were relegated from the Turkish Super Lig, by officialising his marriage with Mitchell, the mother of his three children.

Hadebe and his wife have been flaunting their wedding photos on social media. The young couple exchanged vows at the Bulawayo Civil Court last week.

Hadebe and Matambanashe met at Mzilikazi High School where they completed their O-level studies in 2012.

Hadebe and his wife have been flaunting their wedding photos on social media. The young couple exchanged vows at the Bulawayo Civil Court last week.

Their first child, Jordan was born in November 2016 and were in March this year blessed with twins, Alwande as well as Lwandile, a boy and a girl.

Hadebe was away in Turkey when the twins were born and only got to see them when the season ended last month. He started his football career with Bantu Rovers before joining Highlanders (2015) and Chicken Inn (2016).

He then moved to South Africa in July 2017 where he played for glamour club Kaizer Chiefs before moving to Turkey in July last year.