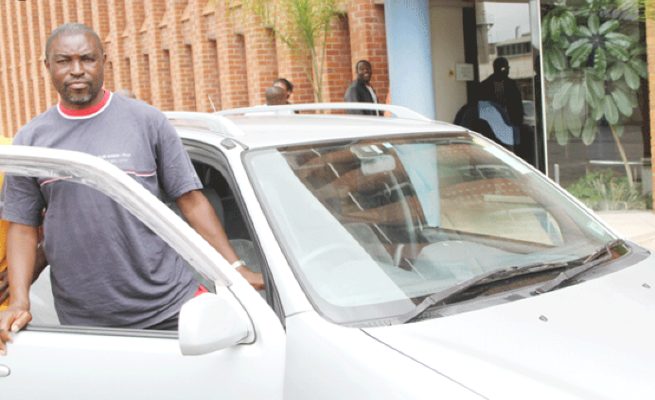 FORMER Warriors captain and coach, Misheck Chidzambwa, who is not feeling well, is hopeful for a quick recovery to reignite his r0mance with the game of football.

Chidzambwa, who played for Dynamos and the national team, is set to undergo surgery to remove a growth in the stomach.

He has been admitted to a local medical facility in Harare where the doctors are doing their best to manage his condition.

“I haven’t been feeling well since the coronavirus lockdown started,” he told The Herald yesterday.

“But, I must say my condition is stable and there is nothing to worry about.

“I am due to go for an operation, which might take place any time from now.

“I am just waiting for the confirmation of the dates.”

The Zimbabwe football legend has been living in the shadows of football since his last job with Blue Rangers in 2011.

Social media yesterday was awash with pictures of the former Dynamos and Warriors kingpin on a hospital bed.

However, many users raised the red flag as they felt it was inappropriate to circulate such images without the consent of the family.

However, the family have since distanced themselves from such a request.

Chidzambwa’s medical bills are being taken care of by his former employers at Chapungu, the Air Force of Zimbabwe.

The family also requested for privacy to allow the defender to go through his treatment without distractions from the social media.

“I really appreciate the concern from the sports fraternity but, if I really wanted assistance, I could have sent an SOS long back,’’ said Chidzambwa.

“Currently, I am being taken care of by the Air Force of Zimbabwe. I am a pensioner in the force and they do take care of their pensioners.

“But if anyone feels he wants to buy a bun for me, from a well-meaning heart, well, I cannot reject such an expression of love.

“As for the medical bills, like I said, the Air Force are doing their part.’’

Misheck and his elder brother, Sunday, are legends of domestic football.

Both were tough defenders for Zimbabwe, as well as Dynamos, and they both captained the national team at some stage.

Although, Sunday’s profile is bigger than that of his younger brother, the latter has also done well for himself in the game.

He made history by becoming the first captain to lift silverware, with the Warriors, when Zimbabwe won the Cecafa Senior Challenge Cup at Rufaro in 1985.

The fact that the country had to wait until 2000, to win another tournament — the Cosafa Cup — illustrates the importance of that early silverware.

Ironically, Misheck was the coach of those Warriors who won the Cosafa Cup at the turn of the millennium.

They thrashed Lesotho 6-0 on aggregate in a final that featured two legs.

Luke Petros, Robson Chisango and Benjani Mwaruwari were on target in the second leg before about 30 000 fans at Barbourfields.

Misheck still remembers the landmark victory in the Cecafa Cup.

“It was a tough match. Kenya was a powerhouse and had won the Cup twice,” said Chidzambwa in an interview with the Herald last year.

“I was more of a utility player and could play right back and sometimes centre half.

“We were so excited to win the trophy. We were so passionate about football yet we were not full-time footballers.

“We would come from our different work-places and train after hours. I worked for Zimbabwe Republic Police (Signals department).”

He played for about five years, for the national team, before hanging up his boots in 1987 due to a leg injury.

“It’s a God-given talent and we are happy to contribute as a family. We just played our football but, in the process, also created history,” he said.

In the late “90s, Chidzambwa deputised the late Ian Porterfield, as well as the late Dutch coach, Clemence Westerhof at the Warriors bench, before eventually taking over in 2000.

The football community yesterday took to social media to wish him a speedy recovery after the picture, showing him lying in hospital, started circulating.