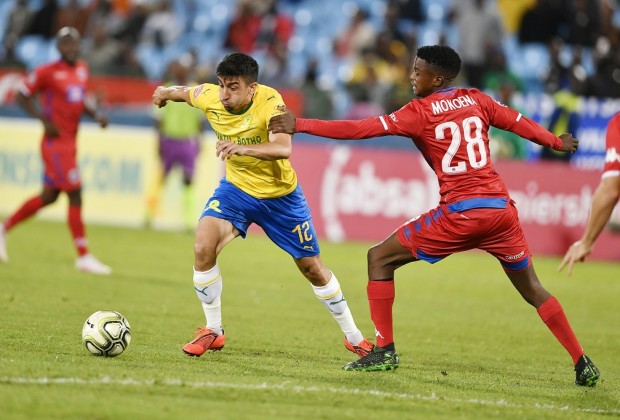 The South African Premier Soccer League is taking shape, with Mamelodi Sundowns, as expected going on a sprint early on. Ten rounds of matches have been played so far, and Sundowns are well in control, though not out of reach for rival teams; they are one of the three teams yet to taste defeat. The others yet to lose a game are Golden Arrows and newly promoted Moroka Swallows.

Sundowns’ quest for another league title as they eye a perfect defence, will meet a very stern test on Saturday 16th January, when they take on SuperSport United in the Tshwane derby. SuperSport have shown real title credentials so far and being behind Sundowns by just two points despite having suffered two losses says it all.

While this season we have already seen the league leaders tackle both Orlando Pirates and Kaizer Chiefs, and won both, the match between Sundowns and SuperSport presents the biggest game of the title contenders so far. Firstly, it brings together the top two teams in a battle for top position, and further, Sundowns have the best defence in the league at the moment, having conceded five goals while SuperSport have already conceded 11.

Also, the two sides have very good forwards, but it seems it is the defensive output that will make all the difference in this game. Sundowns have Themba Zwane, who has been out in the past few matches but had a scoring return as they thumped Baroka 2-0. He has eight goals at the moment and will be complemented by Mothobi Mvala, who has scored three in the last five matches.

Whereas at Sundowns the distribution of goals is more diverse, at SuperSport United Thamsanqa Gabuza and Bradley Grobler are the main men. The two have scored 11 goals in the last five matches and Grobler has been on the score sheet in each of the last six matches.

Sundowns are unbeaten in their last 12 matches while SuperSport have packed up an 11-game unbeaten run at home, with just one loss in 17 home matches, making this a very exciting game to look forward to.

Going by the teams’ returns in attack, we expect a high scoring game, the reason the defences will be the deciders in this game, and while the past encounters have been low scoring, this one won’t be. Bookmakers are set to highlight this game as one of the main in the PSL this weekend and already odds favor both sides to score, with Marathonbet placing odds of 1.86 on that. Unibet are setting over 2.5 goals in this game at odds of 2.16 while Bet365 are backing the same at 2.20 and there’s detailed information on betting on the league as well as bonuses that come with it.

Meanwhile, Moroka Swallows retain their tag as the surprise team of the season so far, being unbeaten and in joint second despite just having been promoted. On the other hand, giants Kaizer Chiefs are fast losing their gloss, as they are placed 10th with as many points after 10 matches. A transfer ban on the team could be to blame for the slump but the side still has top players and to have won just two of their 10 games is a far cry from the side with 19 cups in their name.