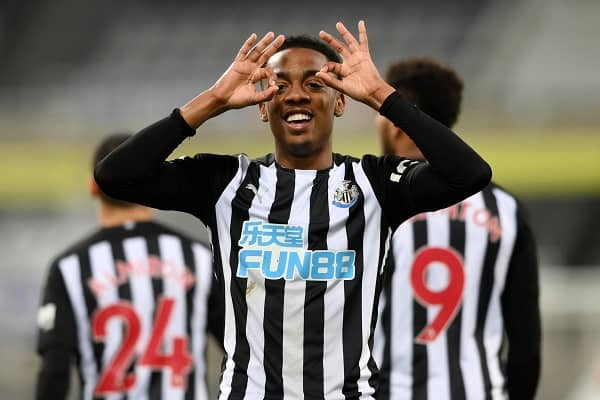 After many stop-stars at Arsenal, Joe Willock seems to have found a place he can finally call home – Newcastle United. The Hale End product may just have seen his final days at Arsenal, but at the moment it is not a development solely dependent on his own decision. This is especially after the turn of events at St. James park.

Willock, considered a fringe player at The Emirates, has struck the right chords at Newcastle united and his goal scoring prowess, which had not been well spotted at Arsenal, is now clear for all to see.

The youngster has scored six times already for Newcastle United and most of his strikes have been point-winning goals. He has drawn discussions as the season heads to conclusion, and it is reported Arsenal are willing to listen to offers.

With Newcastle United having secured survival, they are going to play with lesser pressure and this should be an advantage for Willock in the remaining game. Next up for Newcastle United is a game against Sheffield United. Both teams have secured all they can for the season and only pride is at stake.

Not many teams in the league have much to play for at this stage of the campaign but there’s still teams chasing top four places and other slots for continental football and Wincomparator has preview, predictions and odds for these.

In the case for Newcastle and Sheffield United, both sides are backed to score and in Willock’s recent scoring form, which has rubbed off well at Newcastle United, seeing the team win three of their last six games, Willock to score won’t look like a far-fetched bet. The forward has goals in each of the last six matches.

Interest from Newcastle will just be the news Arsenal want to hear as they look to offload him on a permanent deal, with the club set to go through a period of transition. It is said a permanent move for Martin Odegaard is being mulled at the Gunners, which would expedite Willock’s move.

Newcastle has a lesser demanding atmosphere, compared to Arsenal, and it would be a very good place for Willock’s development. Furthermore, the team having secured their place in the Premier League means he doesn’t have to go out to a Championship side for exposure.

Steve Bruce’s assessment of Willock just about added to the discussion, on where the youngster could feel wanted. “He’s enjoying his football.

“We have taken the reins off him and let him run forward and that was probably what we didn’t have enough of in January, that forward-running midfielder who likes to score. We’d love to keep him but he has got a big future.” The manager said at the close of the Manchester City game.

Transfer experts have also weighed in on Willock’s future with the Englishman rated by Arsenal at between £25m and £30m. That price could be considered too high by Newcastle, but may just be a move by Arsenal to keep the transfer talks long enough for them to determine the future of Martin Odegaard.

Odegaard’s future at Real Madrid is another question altogether. He is not in current manager Zinedine Zidane’s plans but the Frenchman is also heading out, which is news that will disappoint Arsenal as far as keeping the Norwegian is concerned.