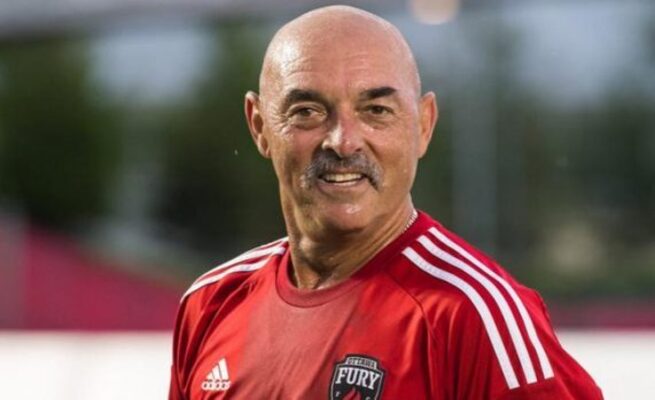 Former Liverpool goalkeeper Bruce Grobbelaar has expressed his desire to be the next coach of Zimbabwe.

His comments come a day after the Zimbabwe FA (Zifa) dismissed Croatian Zdravko Logarusic and his coaching team after poor results in World Cup qualifying.

After a goalless draw with South Africa, the Warriors lost 1-0 to a last-minute goal in Ethiopia to sit bottom of Group G with back-to-back games next month against Ghana.

“I have been watching the Zimbabwe Warriors for some time and I have had my CV in there a couple times to no avail,” he told BBC Sport Africa.

“I know these players are talented. Wherever you look, in every department, they are very good. They need a father figure. From the time of (former coach Reinhard) Fabisch, they haven’t had a father figure – instead, it’s all about the politics.

“But when you get a person who knows this group of players, their customs, they can play. I know all those and I know I can help them.”

“What I see with this bunch of players in Zimbabwe is the finest of players we have had for a long time.”

The 63-year-old, who won 32 caps for Zimbabwe between 1980 and 1998, is convinced the current Warriors’ squad is underachieving.

“It’s a shame that they are not nurtured and pushed into the right direction and that drives me insane,” he added.

“I look at them and say – why are they not getting through to the World Cup? Yes they are through to the African Cup of Nations, but that was with one win and two draws – that tells me that they got there by default.”

Towards the end of his career, Grobbelaar had brief stint as the player-coach of the Zimbabwe national team.

Following his retirement, he had coaching stints in South Africa and Canada and now currently works as a Liverpool club ambassador and a performance consultant for Norwegian second-tier outfit Øygarden FK.

Zimbabwe qualified for next year’s Nations Cup finals, their fourth in a row, in Cameroon under Logarusic but this month’s World Cup results cost the Croatian his job.

Criticism of Logarusic had grown since last January when Zimbabwe Warriors were beaten by hosts Cameroon, Burkina Faso and Mali to make a humiliating early exit from the African Nations Championship.

Zifa is set to appoint an interim coach ahead of October’s World Cup qualifiers as it searches for a permanent replacement.

I know these Warriors are talented, I know I can help them: Aspiring coach...

Sports Muza Mpofu - 14 September 2021 0
Former Liverpool goalkeeper Bruce Grobbelaar has expressed his desire to be the next coach of Zimbabwe. His comments come a day after the Zimbabwe FA...

Lula lula as police officers pounce on pr0stitutes at night

News Muza Mpofu - 14 September 2021 0
COMMERCIAL se_x workers in Mashonaland East province have accused police officers of extorting bribes or se_xual favours in order for them to operate during...

Videos & Pics Muza Mpofu - 14 September 2021 0
Morgen Komichi has called for the recalling of all MPs and Councillors who are sympathetic to Chamisa. Appealing to MDC-T President Douglas Mwonzora, Komichi...

SAD NEWS: Driver dies after being run over by own truck

News Muza Mpofu - 14 September 2021 0
A TRUCK driver was crushed to death by his broken down truck after going underneath to fix brake failure near Nyamhunga bus terminus in...

News Muza Mpofu - 14 September 2021 0
Norton Independent Member of Parliament, Temba Mliswa came under fire after he publicly lambasted Jah Prayzah for sleeping around with married women. In a threaded...

News Edmore Huni - 14 September 2021 0
A 14-year-old girl was given into marriage to a Glendale farmer who already has five wives. Her parents, of the Johanne Marange sect, have sent...

News Cynthia Goba - 14 September 2021 0
A Glen Norah man almost lost his life after he was set on fire for accusing one of the patrons at a bar of...

News Cynthia Goba - 14 September 2021 0
THE case of the reburial of the late former President Robert Mugabe’s remains has taken yet another twist after his family filed an appeal...
Loading...