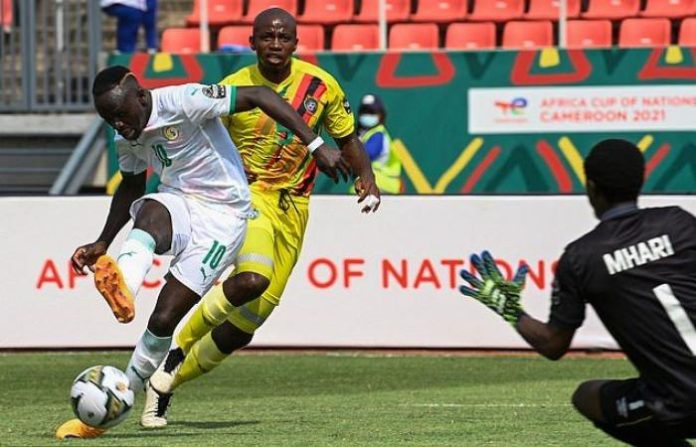 Defeat was harsh on Zimbabwe, who made one of the tournament favourites look distinctly ordinary in Bafoussam.

In the fourth minute of stoppage time, Kelvin Madzongwe was adjudged to have handled as he turned his back on a strike from Pape Gueye.

Featuring a side shorn of several players, including captain Kalidou Koulibaly and Edouard Mendy, because of Covid, the Senegalese had earlier missed a host of chances.

The best fell to midfielder Gana Gueye shortly before half-time but the Paris St-Germain star could not control an easy pass from Mane with the goal beckoning.

Mane himself had been denied earlier in the half when shooting straight at impressive Zimbabwe goalkeeper Petros Mhari after wriggling into space in the box.

Senegal came into this tournament seeking a first Nations Cup crown after losing the 2019 final to Algeria, but were far from their best after only being able to name 17 players, out of a squad of 28, through a mix of Covid cases and injuries.

At the other end, Zimbabwe captain Knowledge Musona let fly from 20 yards only to see his fine strike whistle past the post as his side, looking to reach the knock-out stages for the first time, went close.

Shortly after half-time, Pape Cisse spurned a glorious chance to break the deadlock but could only steer his free header from a corner powerfully past the post with Mhari stranded.

Ultimately, Senegal – Africa’s top-ranked side for the last three years – failed to impress against a well-organised Zimbabwe side who showed no ill effect from the uncertainty surrounding their participation at the finals.

In the run-up to the tournament, the threat of a ban by football’s world governing body had loomed after a government-mandated body had taken control of the local FA, which goes against Fifa regulations.

They were seconds away from keeping their first clean sheet at the Nations Cup, at the 13th attempt, only to be undone when referee Mario Escobar pointed to the spot, with the video assistant referee backing his on-field decision.