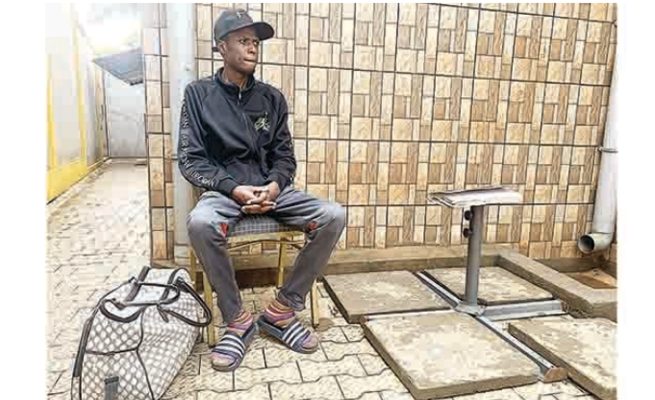 ONISIMO Zhakata, the father of Zimbabwe national football team super fan, Alvin, has been having some sleepless nights in the last few days.

Apparently, the senior Zhakata is anxious to meet his football-mad son, who was left stranded in Cameroon for over two months after accumulating hotel bills and huge penalties on his return air ticket.

Alvin could not travel back home at the end of the AFCON tournament, and has reportedly been living in the streets of the capital Yaounde, bankrupt and without proper food and sanitation.

To add to that, the 35-year-old was recently diagnosed with a heart problem after he collapsed during the tournament in Cameroon.

His father yesterday visited The Herald offices to pour out his grief, as well as to appeal to well-wishers to help fly his son back home, alive.

“I must admit this is the most difficult moment for me and the family. I have never had a good sleep since the beginning of all this,” said Zhakata, battling to control a stream of tears flowing down his cheeks.

“The reality is that he (Alvin) is stranded in Cameroon and I don’t know where exactly he is sleeping and where he is getting his next meal.

“It’s sad I don’t have the kind of money to help him out but am prepared to play my part.

“Since we come from Mabvuku, I had wanted to pass a begging bowl to some of the Mabvuku old boys like Scott Sakupwanya, Chamu Chiwanza and others but I have been discouraged by what people were saying.

“But remember this is foreign land and you don’t know what might happen to him there and no one will care. I am told he is not allowed to leave Cameroon until he pays the bills in full.

“He is my son; the way this whole thing affects me is different from how people choose to feel about it. If anyone can assist, I will be glad. About everything else, we will see when he comes home,” said Zhakata.

A Catholic man to the bone, Zhakata said he has been sending his son prayers every day until he lost his phone in Harare sometime last week.

What is disturbing him most is the negative energy directed on his son on social media. He fears Alvin could be contemplating taking his own life following an ominous tweet posted by the Warriors super fan over the weekend.

Apparently, Alvin has been accused of being a “cheat” and “an attention seeker”. Others even claimed that some high profile citizens sent him money for his air tickets but they could not get accountability for the money. However, Zhakata feels people are being unfair on his son.

“I think we should try and get a better understanding of what is happening around this boy. I would think that he has gone under so much pain and stress and this could be affecting him psychologically.

“What is worrying me the most is that there are some people peddling false information about him on social media. It’s sad because that is not helping the situation at all.

“Some are saying he is losing his mind because of the things he has been saying of late. But I am saying, please let’s assist him to come back home and then I will be more than ready to help him treated and rehabilitated if it needs that.

“He is saying he may no longer be able to see us again. Whatever that means, it’s scary and traumatising to a parent although some may take it lightly,” said Zhakata.

“For you own information, this boy was born super intelligent and he passed his O and A levels. But of late there have been some people influencing him negatively and I noticed he was becoming superstitious.

“So I have been sending him prayers every day and he was acknowledging receiving them. We are Catholics and he was a member of the cathedral choir.

“That’s his type of person.

“Alvin has also been a passionate Warriors cheerleader for many years. If you remember when he went to Egypt, there were some who suggested he should be made African Sports Ambassador but now everyone has forgotten.”

Alvin is known to be close to many Zimbabwe international footballers, who could have easily made small contributions to pay the outstanding bills.

But none of the Zimbabwe national team players has turned up. He used to be close friends with England-based Marvelous Nakamba and were involved in business ventures together.

However, the duo fell apart and Zhakata yesterday confirmed his son and the millionaire footballer were “no longer in speaking terms.”

Alvin was due to leave Cameroon on February 2 but he was told at the airport that he needed to pay a penalty of e387.

Since then bills have piled up. According to a report by www.sportsnewsafrica.com site last week, he owed the Arenah Hotel e1 500 and must also pay new penalties for his plane ticket of around e472.