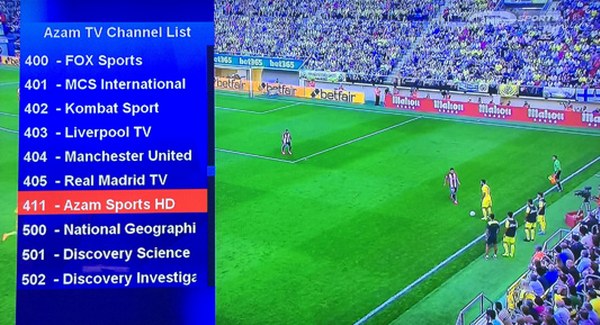 It seems Zimbabwe’s Pay-Tv market may be going through a revolution of sorts. Last year, Econet Media launched Kwese TV in Zimbabwe and now the Tanzanian Bakhresa Group of Companies is bringing Azam TV to our local shores.

This comes after Zimbabwe President Emmerson Mnangagwa said the country was “open for business” after almost four decades of oppressive rule by former leader Robert Mugabe.

“Zimbabwe is open to new international relations, even with those who have been hostile to us before. We must collectively find solutions to our problems and work together for the betterment of the country. It doesn’t matter which nationality you are from but what matters are the policies in place to make business and or investment viable for all ,” said President Mnangagwa.

Azim: A bit of backgorund

The Bakhresa Group of Companies is owned and chaired by one of the wealthiest Tanzanians: Said Salim Bakhresa. The group of companies has dabbled their trade in food products, road transport services, and media among other things. Azam TV started broadcasting in 2013 and right now they are available in Kenya, Malawi, Tanzania, Burundi and Uganda.

They offer a bouquet of over 85 channels. It seems there is a bit of everything for everyone as channels include: BBC News, Aljeezera News, Bloomberg, MTV Base, Nickelodeon, Bollywood content, African movies, Fox life, Fox Entertainment, Nat Geo Gold, Discovery Science, Discovery Investigation. On the sports front Azam has Fox Sports, Manchester United TV, Real Madrid TV and Liverpool TV.

When will Azam start broadcasting in Zimbabwe?

Imminently is the best answer we can give you right now. Bakhresa Group representative, Yusuf K Kamau mentioned that they are ready to roll and are basically waiting for permission:

The cheapest bouquet will be accessible for $5, whilst the most expensive will be going for $15 and will offer over 100 channels, apparently.

You may be wondering if the most wanted English Premier League is on offer but unfortunately you won’t be able to watch that on Azam. But with their most expensive bouquet expected to be $15/month it would have been shocking if Azam had secured rights for the most sought after football league in the world.

As mentioned above, Kwese came onto the scene last year and it offers a $29, $9 and $5 bouquets for 30, 7 and 3 days respectively. Kwese is more accessible than Dstv right now owing to the fact they accept Bond notes . The EPL and soccer fans are yet to be swayed from Dstv though, due to the strangle hold Dstv has on the rights to air more live matches so it will be interesting to see where Azam will fit in the Pay TV market alongside both Dstv and Kwese.

Nonetheless, I do think Azam TV’s entry into the market will be positive because at the end of the day consumers can never have too much choice. I’m particularly interested in seeing what $5 will get subscribers. It will probably be better than what is on offer on our national broadcaster so I guess there may be a market for Azam What are your thoughts? Is there a market for a third TV subscription service in Zimbabwe?