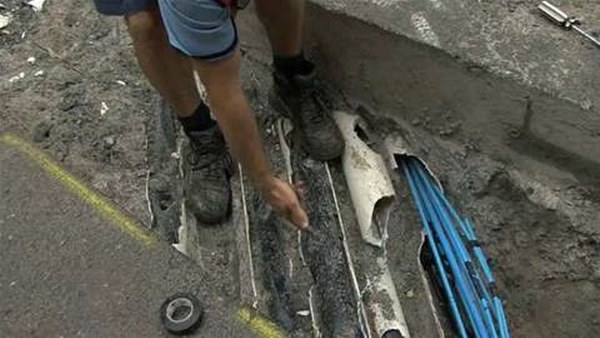 VILLAGERS along the Harare-Beitbridge Highway have been accused of digging up optic fibre cables installed by TelOne under its $98 million national broadband backbone (NBB) project to improve the country’s internet connectivity.

TelOne infrastructure development director, Lawrence Nkala confirmed the development yesterday, saying some villagers had dug up the metre-deep cables just out of curiosity.

On Monday, the telecommunications firm engaged villagers in the Rutenga and Jaka areas in a campaign to educate and warn them against tampering with State property.

“As you may be aware, these developments are a way of enhancing our communications after government in 2016 accessed a $98m loan facility from the China Exim Bank. If it runs through your field, it will not affect anything because it’s buried a metre deep underground,” Nkala said.

This year alone three points have been hit in the Rutenga and Jaka with repairs costing the company between $10 000 and $100 000.

“We are pleading with you to support us because it is our vision that internet reaches your home efficiently and effectively, because you may dig up this cable, but it will not benefit you as an individual because you can’t sell it anywhere, but you would have disrupted communication for your own country and having it back comes at a huge cost,” he said.

The campaign came on the backdrop of recurring cable vandalism cases which TelOne has encountered this year alone with 39 arrests and 16 convicts jailed to a minimum 10-year jail terms each.

Meanwhile, TelOne has slashed bandwidth prices by 40% for tertiary institutions, buoyed by its convergence programme that has enhanced efficiency.

TelOne is upgrading its nationwide system and exchanges as part of the $98 million NBB project which the organisation says enabled it to provide a better range and quality services to clients.

“What all this modernisation has done is to make it possible for us to offer better quality service and reduced prices, in some cases slashing bandwidth costs by as much as 40%. These are the benefits that Great Zimbabwe University has begun to enjoy,” he said.