A 26-year-old woman was forced to pack her belongings by her husband on allegations she was bedding her lecturer for better marks.

Anna Mavurere’s marriage of four years collapsed after her husband Leslie Jona, 33, discovered some audios in her mobile phone where she was discussing with her friend Maureen Bikausaru about how bedding Maxwell Horiro gained her better marks. 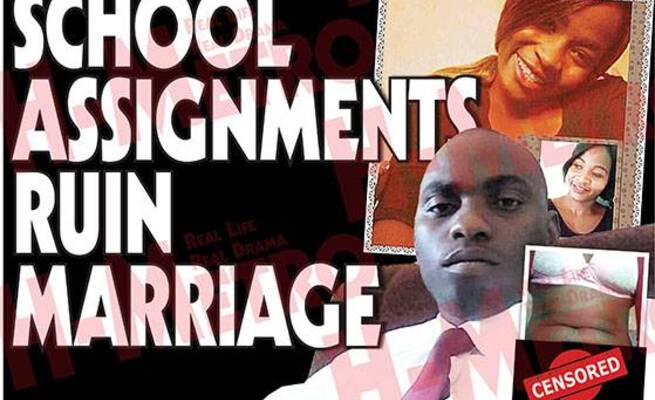 The recorded audios and nud_e photographs of Mavurere was what Jona held as evidence to separate with the mother of his child and is still holding on to her mobile phone.

“I discovered that my wife has been dating her lecturer Horiro to earn more marks and that the lecturer was doing assignments for her,” said Jona.

“I still have her mobile phone with all the evidence of her shenanigans with Horiro and I want to send them to her relatives.

“It emotionally affected me and I had no option other than asking her to pack her belongings and leave my house,” said Jona.

She argued that the audios were part of an assignment on counselling where she recorded and posted to Maureen her friend pretending as if she was one of the victims of se_xual abuse at a teachers’ college located in Mashonaland East.

“My husband was after destroying my education from the day I enrolled at Nyadire College for teaching,” said Mavurere.

“He managed to pay my fees for two terms only and after that allegations of infidelity came one after another as a way of disturbing my studies.

“On the audios in question it was an assignment given to us to do during the national lockdown where I recorded self while pretending as if I was reporting a se_xual harassment in the hands of a lecturer and I never mentioned any name.

“How he came to accuse Horiro that I do not know and I do not know why he is fighting my career yet pandaive naye he never showed a bright future with me.

“He is no longer my husband and I do not know why he is still holding on to my mobile phone bought for me by my sister.

“As for the nud_e photographs, I am the one who captured them since I have a se_xually transmitted disease and I was checking the damage on my private parts.

“Medical doctor told me that it was PEP and I received some tablets which he later hid from me along with the medical documents until today I do not know where he placed them.

“After he took my mobile phone he went on to send the audios to all my WhatsApp groups that included one I shared with other students calling me names.

“He se_xually, verbally and physically abused me that at one time I nearly took my life had I not received good counseling,” said Jona.

Contacted for comment, Horiro denied the allegations describing them as malicious, fabricated and unfounded.

“To set the record straight I do not have an affair with this student, let alone know her at personal level,” said Horiro.

“Furthermore, I do not trade my work with se_xual favours,” he added.

Bikausaru echoed Mavurere’s sentiments that the audios were part of their assignment and had explained it to Jona.

“I think the two had other issues because I tried to explain to the husband about the audios but he went on to dismiss my explanation,” said Bikausaru.