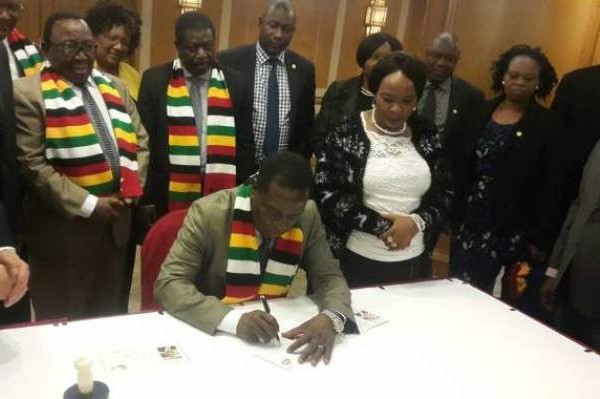 The Centre for Education, Innovation, Research and Development Act, which seeks to create a technology hub to harness and coordinate research and innovation in universities and colleges to drive Zimbabwe’s modernisation and industrialisation in public and private sectors, has been signed into law by President Mnangagwa after passing through Parliament.

The objective of the Centre for Education, Innovation, Research and Development Act is to coordinate and house programme-based synergies among universities, teachers’ colleges, polytechnics, industrial training colleges, vocational training centres and innovation institutions in tackling national challenges for the modernisation and industrialisation of the country.

The law establishes the Centre for Education, Innovation, Research and Development to help accelerate the growth of industry and job creation as envisaged by National Development Strategy 1 and Vision 2030 of creating an empowered upper middle income society.

It will apply to public and private industry and all institutions of higher and tertiary education in Zimbabwe.

Clause Six of the Act spells out the functions of the centre, which includes support for the development and demonstration of technology-based products, processes and services and creating technology jobs across the economy for graduates from all institutions of higher and tertiary learning in Zimbabwe.

Other functions include providing engineering and technological solutions to industry and the country.

This come as the Insurance Act and Insurance and Pensions Commission Amendment Act were also gazetted last Friday after receiving Presidential approval.

The new Insurance Act repeals and replaces the existing Insurance Act since it makes substantial changes to ensure modern best practices are followed.

It has several provisions that protect policyholders by regulating how insurance firms and their stakeholders such as brokers should operate.

It provides for IPEC to co-operate with foreign law enforcement authorities and foreign pension and insurance supervisory authorities and to regulate the exchange of privileged information with them.

The Policyholder and Pension and Provident Fund Members Protection Fund will be funded, among other sources, by levies to be paid by every insurer, pension fund, provident fund or retirement annuity fund; the levy will be fixed by regulations to be made by the fund’s board with the approval of the Minister of Finance and Economic Development.

News Muza Mpofu - 24 November 2021 0
FIVE armed robbers raided a house in Waterfalls Sunday morning and attacked the owners before they got away with various electrical gadgets and a...
Loading...