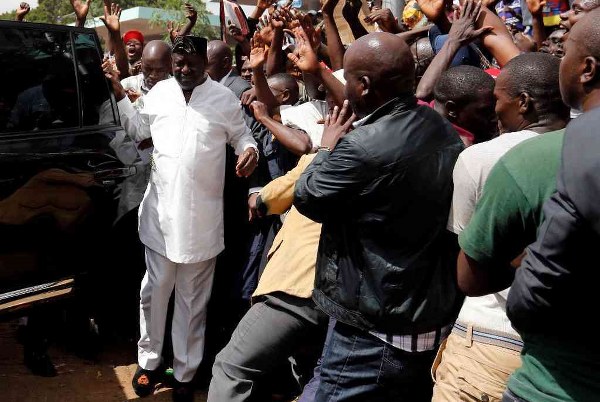 Opposition leader Raila Odinga has been sworn-in as the people’s president, bringing possible treason charges to the fore.

The punishment is death but he said this is a price he is willing to pay.

Wearing a white outfit and a black hat, Raila swore by the Bible and signed documents.

“I, Raila Amollo Odinga, do swear that I will protect the nation as the people’s president.. that I will be faithful … so help me God,” he declared at Uhuru Park in Nairobi.

Ecstatic supporters who went to the venue from as early as 6am cheered, danced and blew whistles during the proceedings.

The oath was administered by Ruaraka MP TJ Kajwang and former Nairobi governor candidate Miguna Miguna. It is not clear what Raila will do since Kenya has president Uhuru Kenyatta and deputy president William Ruto.

He was to be sworn-in alongside Kalonzo Musyoka, but the Wiper leader was not at Uhuru Park in Nairobi on Tuesday afternoon. He said Kalonzo will take the oath later.

“Kalonzo hayuko … kwa sababu ya maneno ambayo yalifanyika … mtajua baadaye … ataapishwa baadaye (Kalonzo is not here … because of events that took place … you will know later … he will be sworn-in later.”

Sources close to the Wiper chief said he was at Serena hotel but did not reveal what his business there was.

Raila thanked the people of Kenya for showing the rest of the world “that a people united shall never be defeated”.

“The people have gathered in hundreds of thousands to say enough is enough with election rigging,” he said.

“This is the first step in doing away with election autocracy in our country. I thank the people of Kenya for their courage and patience.”

The ODM boss and veteran Opposition leader deems Uhuru’s presidency illegitimate. He earlier castigated the state for banning live coverage of events at Uhuru Park saying it shows Kenya is sliding into a failed state.

“The move shows Kenya has followed the Uganda way where the media was barred from showing the will of the people. This is unfortunate,”he said.

“We have to ensure that we take the law back to the hands to the people of Kenya.”