Although the event organisers were yet to reconcile figures at the time of going to print, Winky D’s handlers were also surprised by the attendance, which left them contemplating having secured a spacious venue. 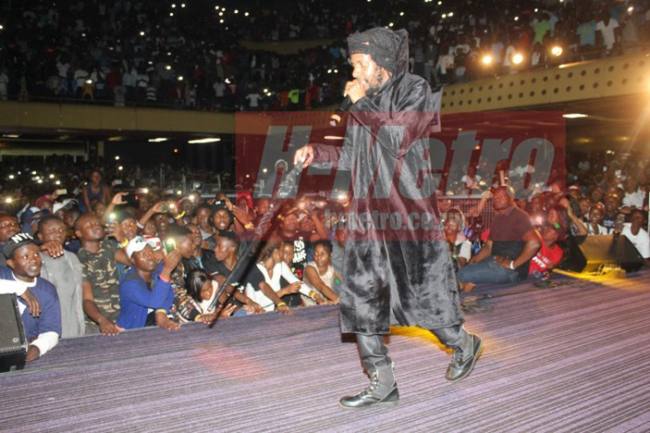 Although other artistes have filled HICC before, Winky’s crowd deserves a special mention since there were no empty seats or patches in the auditorium where it was difficult to dance or move around.

Winky D’s manager Jonathan Banda could not reveal their strategy saying, “We strategies around it. (we have a) bag of tricks.”

Even the usually hyperactive Banda kept on grinning like a Cheshire cat and at one point; he was overheard saying, “kanzvimbo kaita kadiki pamagitare anhasi’, ours before the main event owing to the uptake of advance tickets. 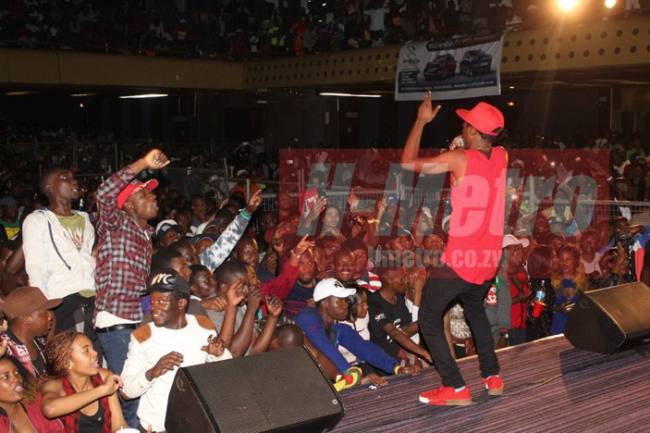 The new record, which Banda said did not come as a surprise to the Vigilance Camp owing to aggressive marketing during the build up to the event, bears testimony that the Ninja president appeals across generations.

So inspiring is Winky D’s appeal to the masses if the attendance is anything to go by, even at some national events where guests are usually bussed to same venue.

H-Metro is informed Election Resource Centre had taken up around 200 tickets.

And not only did Winky D attract the hordes of young fans but the capital’s well-heeled also made their way into the auditorium.

While it can be argued that Winky D now deserves the ‘man of the moment’ tag, only haters will write him off at their own peril as the 35-year-old’s time at the helm has come.

AGGRESSIVE MARKETING
Event coordinator – 2 Kings Entertainment – who went full circle during the build up to the main event concurred with Banda that they had to put on a new strategy for a massive turnout.

“It’s now clear the marketing team is now experienced. We manage to record such a highest figure since we have been into music promotion at this venue due to support we got from the media (both print and electronic), social media and even our team at Coloursel and Vigilance Music.

“I never had time to mourn my father but still managed to work well with everyone in my team and vigilance team,” said Nosh.

Over the past few years, HICC had become a fortress for Jah Prayzah who has adopted it as his second home for album launches among other high profile shows featuring international acts.

During the build up to the event, Winky D’s camp said they were not reading much into what others have achieved but where confident the show would be a success owing to the response of the show.

Their recent triumph in the Coca Cola Top 50 videos prompted them to stage the launch at HICC, departing from the norm where Winky D had a casual approach when unveiling new album, event organisers say.

ENTERTAINMENT VALUE
Forget about the big lineup which some criticised labelling it ‘gala’, fans got real value for their money as the programme went according to plan.

The majority of supporting acts in the line-up showed up and ushered out all their artistic verve, befitting the double celebration.

Their loyalty to Winky D also silenced doubting Thomases who never thought it would live to its billing while fellow chanters among other artistes of his generation from other genres embraced the chanter.

Special mention goes to youthful chanter Jah Signal who proved beyond doubt that he is the future of Zim Dancehall with a splendid performance.

The crowd was so ‘mature’ that there was no can throwing, as has been the case with most events associated with Zim dancehall.

Even Ricky Fire who failed to charm the packed HICC left the stage in peace after he finished his performance.

The Bigman was also joined by Buffalo Souljah to perform the song Rugare and it was a redemption for the South African-based chanter who had earlier on received a lukewarm response.

Vabati VaJehova spiced up the event when they appeared on stage to perform their duet with Winky D, though the act was disturbed by poor sound system.

Even Winky D was angry as he was heard castigating the engineers for sleeping on duty, in particular, when the microphones turned off in the middle of performance.

The public address system hiccups also angered Kinna who also charged towards one of Winky D’s band members accusing of tempering with sound.

Comedians too who also did the marketing on social media also rallied behind Winky D at the event in a rare show of solidarity.

However, there have been concerns over fake pledges at recent album launches as some of the business people fail to honour their promises but Ginimbi later took to Twitter saying:

“I bought @winkydonline ‘s 1st copy of the album GOMBWE, CONGRATULATIONS and happy birthday my guy, zvekuti ratengwa marii hazvina basa mari inotsvagwa imwe…I am trying to help our local superstars, making sure they get same support as other African artists.”

Sport, Arts and Recreation Minister Kazembe Kazembe was the guest of honour and he joined Winky D on stage to congratulate him.

However, it was the issue of pledges which has hogged the limelight over recent album launches where artistes have been promised fortunes.

The majority of top artistes like Jah Prayzah, Suluman Chimbetu, Alick Macheso and even in gospel circles have been promised residential stands by some of the guests of honour who never lived to their words.