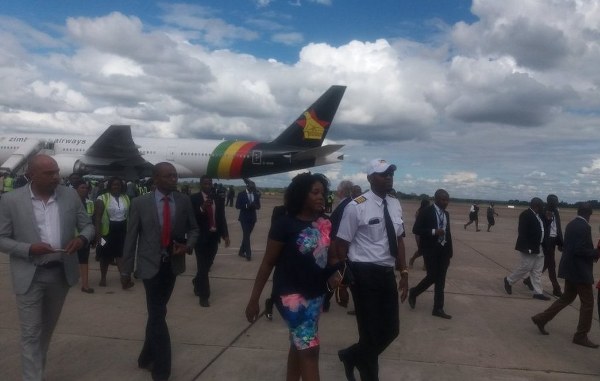 A CABINET minister confirmed Wednesday that former President Robert Mugabe’s son-in-law was one of the pilots who flew into the country a Boeing 777-200ER acquired from Malaysia.

The minister however, insisted the veteran leader’s family doesn’t own the aircraft.

Chikore, wearing captain fatigues although there is no record of him having been promoted to this rank, was first named last year as one of the negotiators for the purchase of several second-hand aircraft from Air Malaysia.

He quit Air Zimbabwe after Mugabe was ousted under military pressure last November.

Ministers who were at the Harare airport Wednesday to receive the aged plane did not explain why Chikore was among the pilots who flew the aircraft into the country when he was no longer employed by the national airline.

Mugabe and Chikore were reportedly involved in the deal to acquire some four planes from Malaysia which would be operated by a new airline called Zimbabwe Airways.

Although the new airline was said to be privately owned, the government has confirmed paying $41 million out of the $70 million that is needed for the four Boeing 777 planes.

A joint statement this week by the finance and transport ministries added little clarity over the matter.

“Government through the Finance ministry took a decision to secure funding for the procurement of the four planes together with the eight Embraer aircrafts which would be used as feeder planes.

“To date government has arranged funding to procure two Boeing 777 planes and one Ambraer plane under a special Purpose vehicle called the Zimbabwe Aviation Leasing Company,” reads the statement in part.

Speaking at the Harare airport on Wednesday, finance minister Patrick Chinamasa said both ZALC and Zimbabwe Airways were owned by the government.

“We will lease the aircrafts to third parties until Air Zimbabwe, which is now a bottomless pit, puts its house in order.”

However, the registrar of companies in Harare said this week that the file with the details about the new airline and ZALC was not available for “security” reasons.

Meanwhile, information emerging via various well-placed sources about ZALC is that two of its directors are connected with, or related to, senior government and aviation officials in Harare.

Minister Chinamasa also insisted that neither the Mugabes not their son-in-law owned the two companies.

“I wish to categorically state the aeroplane that is outside there is the property and asset of the Government of Zimbabwe,” he said.

“I know speculation has been rife that the aircraft belonged to the former First Family.

“That is wrong, and I am here to set the record straight.

“Simba Chikore has no interests in the business, directly or indirectly.”

The minister added; “(Mr) Simba Chikore has no shareholding in this plane.

“We only recruited him to assist us with technical support during the negotiations since he has vast experience in the aircraft industry.”

“I am one of the people who believed in the media reports,” he told Chinamasa.

“We are concerned because when you do not give us information we will have to believe the newspaper stories.”

“These Boeing 777 planes should go to their traditional routes like the Harare-London route. Before Air Zimbabwe became a bottomless pit, we used to win awards every year as the best airline in Africa.

“I hope we will be flying to London, China and other countries as soon as possible.”

Kaseke is likely to be disappointed however regarding the resumption of direct flights between Harare and London.

One experienced pilot who has previously flown routes ex-Harare and is now in South Africa, and asked not to be named, said: “They are not suitable for Air Zimbabwe’s present routes nor customers.

“It will never be allowed to land at Gatwick Airport because that route belongs to Air Zimbabwe which is banned from flying in Europe. The UK link was previously Air Zimbabwe’s most profitable route.”