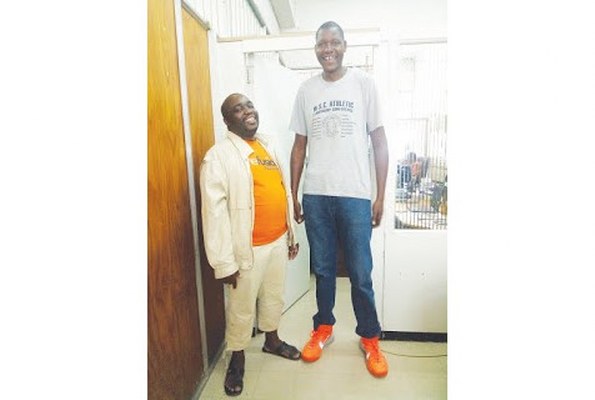 Simbarashe Mhukahuru, an electronic graduate from the University of Zimbabwe standing at 2,11m turned heads when he walked through the streets of Masvingo on Zimbabwe Defence Forces Day.

People stopped, curiously walked towards him just to have a closer look. Most however, could not muster the courage to confront him as his height alone is intimidating.

Mhukahuru however, is a sociable, witty and humorous guy. He cracked jokes with ease and left reporters at The Mirror newsroom in tears with laughter.

“One advantage of being tall is that at 2,11m I don’t share the air that I breathe with anyone. The air I breathe is mine alone and fresh. Imagine if I was wedding this girl, I will need to kneel down in order to Kiss her or she will have to stand on top of a table in order to kiss me,” he said while pausing for a picture with Nonia Sibanda who is almost half Mhukahuru’s height at 1,5m tall.

He says one disadvantage of being that tall is that he does not fit into the little cars commonly referred to as mushikashika.

Mhukahuru believes that he is the tallest man in Zimbabwe as he has never come across anyone with more height. The Mirror googled and found out that another man considered one of the tallest in the country is Charles Nyoni of Hwange who is however 1cm shorter at 2,10m.

Mhukahuru who used to play basketball at national level also has problems getting the right size of clothes as he puts on size 18 shoes.

He buys his shoes from the UK.

He had to bow his head so he could enter the editor’s office. Mhukahuru is so tall that The Mirror editor, Nkulumani Mlambo looked like a midget when he paused for a picture with him.

Born in Zvimba, Mhukahuru grew up with height that was average among his age mates. He however suddenly noticed that he was growing very tall when he was doing a Level at Kutama High.

He says he has been the butt of jokes because of his height but that does not bother him. In fact he brags about his height.

The World’s tallest man Billal Hyder who visited the country in 2015 during the Harare Agriculture show is however 29cm taller than Mhukahuru.

“I am used to see people discussing about me from a distance, some are afraid to approach me, but I am not annoyed by that. I even approach and tell them to feel free to talk to me. Musaita usimbe hokureba guys because those are some of the advantages of being tall,” Mhukahuru will tell them.

He says both his mother and and father were giants but not as tall as him.

He had hoped to play basketball in the USA but has since hung his boots after he failed to get a visa. Mhukahuru was very intelligent at school hence he got an electronic engineering degree with UZ.

Mhukahuru was born in Zvimba at Murombedzi Hospital and went to Chikurubi Primary and Kutama High school for secondary education.

He proceeded to the University of Zimbabwe for a degree in Electrical Engineering and briefly worked for ZESA.

“I grab whatever is available as long as it fits. As for the shoes I put on size 18 American and 17 UK, there are some friends who source them for me from outside the country,” he said.

Mhukahuru is married and has a son, Leo who is 9 years old and is already playing basketball for the juniors in the national team.

His wife Lin Muchenese is a student at the Great Zimbabwe University.

News Muza Mpofu - 14 January 2021 0
NEARLY 10 000 people have been arrested countrywide for not wearing face masks and more than 16 000 were arrested for flouting lockdown regulations...