Forty-two people are feared dead while 27 others sustained various degrees of injuries when a Brooklyn Express bus burst into flames about 10 kilometres out of West Nicholson Thursday night.

The bus was coming from Zvishavane through Filabusi and was on its way to Musina in South Africa.

Narrating the ordeal from his hospital bed at Gwanda Provincial Hospital the driver of Brooklyn bus Mr Ndabezinhle Sikhosana said the bus burst into flames after a smell of a hazardous substance was detected.

While others believe the accident could have been as a result of an electrical fault, the Zimbabwe Republic Police spokesperson Chief Inspector Philisani Ndebele says investigations to establish the real cause of the accident are in progress.

The Minister of State for Matabeleland South Province Cde Abednico Ncube has visited victims of the horrific bus disaster at Gwanda Provincial Hospital and sent a message of condolences to the bereaved families.

Charred remains of the 42 victims are still at the accident scene while those who sustained serious injuries where referred to Bulawayo for further treatment.

Yesterday’s accident comes barely two weeks after two other buses side swiped along the Harare-Mutare road that led to the death of 50 passengers and scores hospitalised. 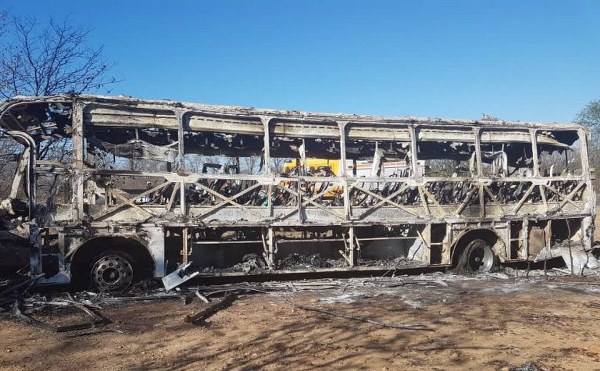