Two senior Ministry of Primary and Secondary Education officials from Gwanda District are reportedly missing after their vehicle was swept away at Msisi river in Ntalale ward 11 last night.

The officials who were coming from Gungwe Secondary School are believed to have attempted to cross the flooded river, resulting in their vehicle being swept away.

The car was discovered this Tuesday morning 150 meters from the Msisi river bridge by a passerby.

Efforts to locate the two occupants have been fruitless, forcing e police to call in its Sub Acqua Unit which will begin the search tomorrow.

Meanwhile, last night’s heavy rains, which were accompanied by strong winds, left a trail of destruction.

Scenes of desolation and ruin are visible in most parts of Gwanda town in the after math of the destructive rains.

Ssphiwe Moyo who resides at Garikai/Hlalani Kuhle houses is among those left stranded after strong winds blew off roofs and rain water flooded several homes in the high density suburb.

The Joshua Mqabuko Nkomo Polytechnic student said while her educational material was also soaked in the storm water, providing a roof over the head of her two young children is her top priority.

“The situation is really desperate as I have young children who have been left without a roof over their heads. We would really appreciate government assistance as soon as possible,” said Moyo.

Other families facing the same predicament recounted the events of last night.

“It was around 9pm when the rains started and in no time, the roof was blown away. We don’t know what we will do as our and food property has been soaked in storm water,” said Mr Gilbert Ndlovu.

The residents made an appeal to the Civil Protection Department to assist them with building material which is now beyond their reach.

The Municipality of Gwanda also incurred huge losses after solar panels at Phakama Clinic were destroyed and the facility’s pharmacy roof blown away.

The council-owned Jahunda pre-school was also affected, while Phelandaba Stadium will require about $5000 dollars for rehabilitation.

The rains also brought down billboards in the town and uprooted several trees.

The storm also destroyed a school in Beitbridge while over-running crossing points across streams which do not have bridges.

At Swereki Primary School, roofs were blown off, while the only access roads to the school have been swept away.

Also in Swereki area is the Masera Bridge that also looks like it might be swept off anytime should rains continue. 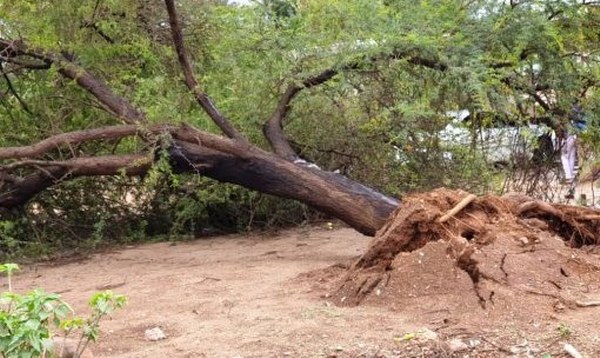