PROPHETIC Healing and Deliverance Ministries founder, Prophet Walter Magaya’s photograph of him and a footballer eating roasted corn (maputi) and freezit circulating on social media has been met with mixed feelings. 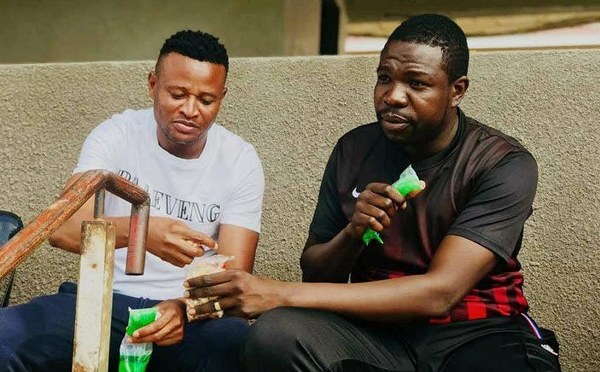 Many people have been saying that the man of cloth is now broke and struggling to raise a meal for his Yadah FC team that survived relegation. On the photograph circulating on social media, Magaya is sharing maputi with Zhaimu Jambo, a refired 2imbabwean footballer who last played as a left back for Kaizer Chiefs in South Africa.

Below are the comments posted on social media over the pictures of the two.

“No one will remain rich if he buys football club considering the distances, accommodation and bonuses expected by players at the end of a season. Magaya apedzwa ne Yadah FC akukabira maputi. want to believe that Prophet Magaya is not an angel he is as human as anyone else and loves maputi anetwunhu twake murume uya musanyeperane guys.

“Prophet Magaya’s ministry workers are stealing offerings and making him poor by overcharging items bought in building and repairing his instruments. They are biting the hand that feeds them that is why he is broke to eat maputi.

“Prophet Magaya has many unfinished projects that consume a lot of money that is why he is broke to take maputi for lunch.

HMetro visited Prophet Magaya at his hotel where he could neither confirm nor deny that things are hard for him financially. Prophet Magaya told HMetro that he has learnt both to be poor and to be rich since he was raised from a poor family in Chitungwiza.

“I was shocked by comments posted following the circulation of the pictures of me and Zhaimu,” said Prophet Magaya.

“I spent the better part of Saturday training with Yadah FC and assessing some of the new players we are expecting to shake PSL teams at the beginning of the season.

“We enjoyed the talent shown by the young players and Zhaimu too. We forgot to order food and we had to ask for maputi and freezits since it was hot that is when we were captured unknowingly munongozivawoka mapaparazzi zvaanoita.

“We also shared bread tikanwira mvura handizive kuti iwayo akapotswa sei neakatora mafotos acho. “To say I am broke or I am rich, people judge me better than myself. What I know is that I grew up from a poor family and leant to be content with what I have.