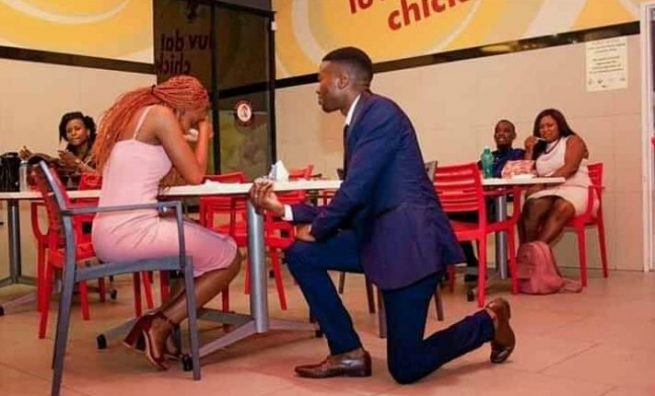 Something is trending on social media. Could it be a sex tape or anything of that sort? No, this times it’s something good and worth trending. Young man makes the most unexpected move at a much unexpected place.

Makhosana Mguni and Belinda Nyoni are the two lovebirds from Nketa 6, Bulawayo that have been trending on social media after Mguni went down on his knee proposing marriage to his girlfriend of six years at Chicken Inn Trade Fair.

People, companies and organisations could not help but began congratulating the couple by donating wedding gifts to the couple.

Some have even gone as far as creating a page to arrange a wedding for the couple.

The bigger question is; was the couple ready for the already planned wedding?

Nyoni, the bride-to-be, revealed that they had not yet set up a wedding date, but did not mind having a big wedding if everything fell into place.

“We have not yet set a wedding date but we do not mind having a big wedding as people have suggested on social media,” said Nyoni.

Though some people mocked and laughed at the romantic young man for proposing at a fast food outlet, in an interview with a local radio station Mguni gave his explanation on why he chose the particular fast foods outlet.

“I met Belinda at Chicken Inn and we have always loved hanging out at Chicken Inn so there was no need for me to indebt myself by going to a place that I can barely afford,” said Mguni.

A contradictory picture of a man who had rolled himself in dust and seemed stressed made its errands on social media after the proposal claiming Nyoni had declined Mguni’s proposal. However, Mguni has made it clear that it wasn’t him.

“My proposal was not turned down, even though I looked similar to the dirty guy but that wasn’t me, so people shouldn’t think anything went wrong with my proposal.”

Gifts began pouring in as soon as the picture went viral as a local movie house offered them 44 free tickets paving way to more companies pledging, even some influential social media figures like Madam Boss took part in the scramble for publicity as she offered make-up for the bride and her bridesmaids on the wedding day.