Rescuers pulled out eight illegal gold miners alive at Cricket Mine on Saturday, five days after they were trapped in flooded shafts.

Rescue efforts were continuing to find about 60 others whose fate remains unknown, in accident that the government belatedly declared a disaster on Friday. The declaration allows government agencies to marshal more resources for the rescue efforts, including from donors.

The accident in Battlefields, 175 km west of Harare near the town of Kadoma, happened on Tuesday night and has shone a light on the dangers facing illegal gold miners, who last year contributed a large part of Zimbabwe’s record 33 ton bullion output.

“So far we have managed to bring out eight miners alive and we are yet to assess and find any more people down there who are still alive,” Tapererwa Paswavaviri, the government deputy chief mining engineer told reporters at the accident scene.

The miners, who were covered in mud, were whisked away by officials before speaking to reporters. Rescuers briefly stopped operations due to rain.

Dexter Nduna, the Member of Parliament of the neighbouring constituency of Chegutu West, told ZimLive by phone that the survivors said they stood on top of a rock outcrop underground. 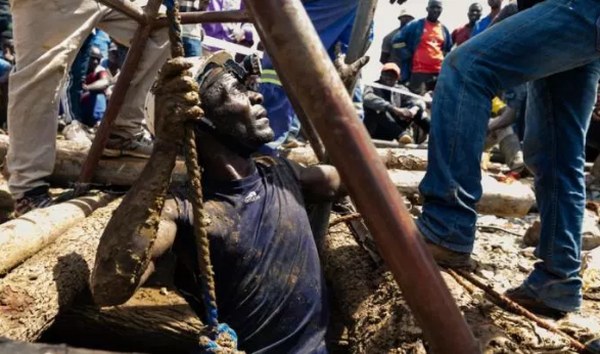 “We are hoping that more survivors could come up, water pumping is still continuing, everybody is here and we are all keeping our fingers crossed that we could have more than the eight that have been taken to hospital alive. They are in a stable condition.”

Local Government Minister July Moyo said in a statement on Friday that the government had declared the incident a disaster and that up to 70 people could have been trapped in the pits.

The slow government response and apparent lack of disaster preparedness has riled locals. Fellow artisanal miners and big mining companies have been leading the rescue effort under treacherous conditions. The government has appealed for about $200,000 to feed the families of the missing miners and rescue workers as well as prepare funerals for those who might not make it out alive, drawing fire from the opposition MDC which says the government has its priorities wrong.

“It’s unforgivable that this government abandoned these people for so long before a disaster was declared. They spare no resources when government officials fall sick, but they have no money to rescue 70 young Zimbabweans trying to eke out a living through the only way they know how because they have no jobs. It’s an outrage,” MDC spokesman Jacob Mafume said.

Battlefields and surrounding areas are rich in gold deposits and popular with artisanal miners, known locally as “Makorokoza”, who use picks and shovels and generator-powered water pumps. The makeshift shafts and tunnels can easily collapse in the rainy season when the ground is soft.

The pits are dotted around a clearing some 8km from the main dirt road. On the edges are shacks made of plastic which serve as accommodation for those digging for gold.

Nduna hopes lessons will be drawn from the incident about mining safely.

“I hope this can be a learning curve for those that are holding mining claims for speculative purposes if they can cede them to artisanal miners so that before they engage in mining activities they can create safety nets so that when they go down under the shafts they are fully aware that they are protected from any disasters that may occur,” he said.

The two mines where the miners were trapped are owned by two big mining companies who are currently not using them. Artisanal miners, like poachers, arrive in the night and go down the shafts with little regard for their safety.

There are no reliable records at any one time of how many are underground in inter-connected tunnels, which has resulted in estimates of the trapped miners varying wildly between 23 and 70 people.

Anxious relatives and other miners have continued to camp at the mining site hoping to see their colleagues amid frustration that the rescue process was taking too long.

News Tshuma Rueben - 5 June 2020 0
The MDC-T led by Thokozani Khupe on Friday got an interim court order from the Magistrates Court to occupy the Morgan Richard Tsvangirai (MRT)...

News Edmore Huni - 5 June 2020 0
The European Union (EU) has slammed President Emmerson Mnangagwa's government for what it considers as lack of respect for the rule of law. In a...

'Shame on you Emmerson and all you who are being used by him, shame...

News Cynthia Goba - 5 June 2020 0
MDC Alliance vice presidents Tendai Biti and Lynnette Karenyi-Kore and several other party leaders have been arrested for trying to gain access into the...

We're coming for you! You work for Satan! Ediots!: Threatening messages painted at Mudenda's...

News Tanya Mugabe - 5 June 2020 0
AS the battle for control of Harvest House – the MDC Alliance’s citadel of power – continues, the trustees of the property are reportedly...

News Sekai Moyo - 5 June 2020 0
THE Dr Thokozani Khupe led MDC has kicked out a faction led by Mr Nelson Chamisa from its Morgan Tsvangirai headquarters. Although there was some...

JUST IN: Use of soldiers and police to take over Chamisa's Harvest House offices...

News Muza Mpofu - 5 June 2020 0
The United States embassy in Harare has condemned the government of Zimbabwe’s use of the military to seize offices that were being used by...