In a recent video posted online, the man of God is attacking politicians as usual and moving around, there are bouncers with black shades walking around with him, making sure he is safe.

The man of cloth started by attacking other men of cloth like Prophet Walter Magaya of PHD Ministries for having body guards, saying men of God should never have personal body guards since God is the one who protects them.

In one of his short videos that went viral on social media, he said, “…unoona iye ane mazimonya aanofamba nawo, asi iwe anokupa ndandi kuti ikuchengete…” (You are given a rubber band/ (annointed wrist bands) to protect you but he moves around with Bouncers…

Pastor Chiwenga was involved in an road traffic accident which claimed his very young wife and he blamed his enemies including politicians whom he said were following him and trying to kill him.

There was divided opinion over this incident as some people believed it was God punishing him for fighting every person who preaches about Him.

Ever since the man of God recovered from the accident he is now preaching with bouncers in black shades, something that he has always been preaching against.

Some few months ago, he was attacked whilst preaching by some unknown man, who he also claimed were sent by politicians and church leaders. 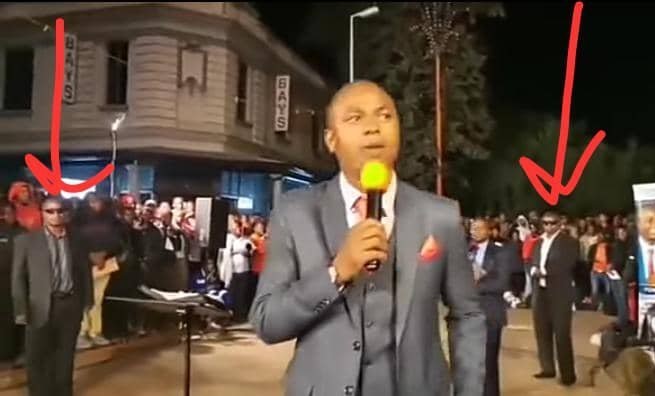 Maybe it is because of his enemies who are now far too many that he won’t even know who will attack him, maybe it’s time he reinforced his security and help God protect him.