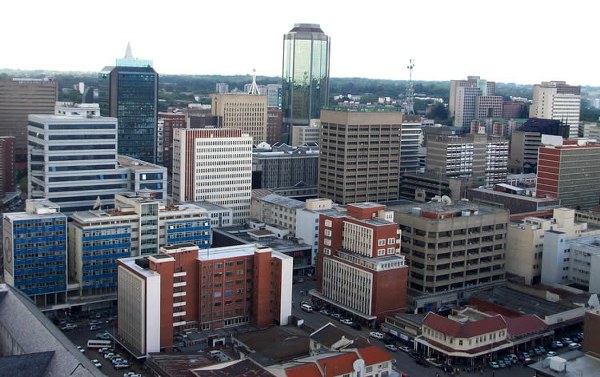 This girl grabbed attention in Harare when she was caught precariously sitting atop a 12-storey Michael House building in town with her feet dangling over.

H-Metro lenses caught the young lady dicing with death on the rooftop looking calm and undisturbed with many thinking she was about to commit suicide.

However, H-Metro caught up with the young lady and she claimed she was simply having one of her routine afternoons on the 12th floor where she lives.

The girl, who only revealed that she is in her early twenties grabbed the attention of onlookers just before sunset.

“I was just sitting on the edge and usually I do this every time when I feel like having some air.

“I have been living here with my cousin since April.

“The height doesn’t scare me and I was surprised to see my neighbors scolding me saying I had attempted suicide,” she said.

She said she is a nurse aid on attachment at a local hospital where she knocks off at 1 pm and is confined to the rooftop house.

According to security, the girl’s uncle Khumbulani Moyo is in charge of the rooftop house.