The self-confessed thigh vendor who caused a massive commotion at Arcadia Shopping Centre in Harare has said that she was forced to resort to drastic measures after her client tried to shortchange her.

The commercial se_x worker, name withheld, said that she was furious that the man wanted to pay her only ZWL$15 when she had indicated that she charges US$2. The ZWL$15 translates to a measly US$0.50 (50 cents) while the US$2 translates to between ZWL$40 and ZWL$45. 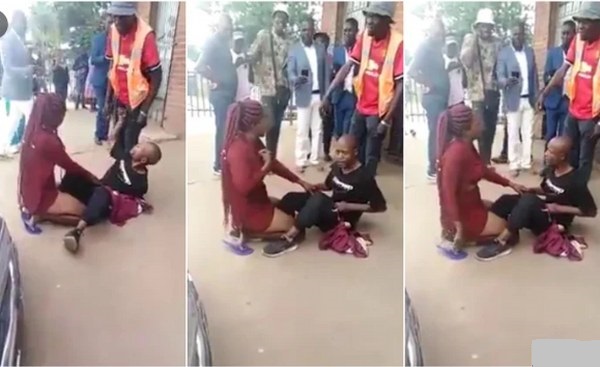 The woman explained that the man had said that he was only willing to pay ZWL$15.00 per session because that is the going rate for the ladies who ply their trade in that part of town. However, the irate lady in the video argued that she was different from the other ladies and that her charges were premium as she demanded at least US$2 or ZWL$40.00 per session.

She then proudly proclaimed that she is able to educate her kids at boarding schools using the proceeds from her dubious profession. The woman said that she has three children who currently learn at boarding school and as such could not afford to charge such paltry amounts.

The thigh vendor also threatened to take the cond0m the man had used during their brief relationship to sangomas in order to ‘fix’ the man for reneging on their verbal contract. She also said that the man was very lucky because she had wanted to rip off his privates to teach him a lesson.

However, it seems the matter was resolved as people in the video could be heard saying that she should not ‘fix’ the man because he had sold his phone to placate her.

Please note that the videos below contains strong colourful language: