Zimbabwean church leader has brought media attention after throwing tantrums against his estranged wife for allegedly spreading rumours of him sleeping with men and this did not go down well with him as he rather uses strong language threatening her with violence, something unbecoming of the man of the cloth.

Apostle Casper Bonga, the founder of the Voice of Fire International Ministries, goes on a tirade after ex-wife, Grace Mupesa, made daring claims on social media about him sleeping with both men and women and abuses drugs and alcohol.church 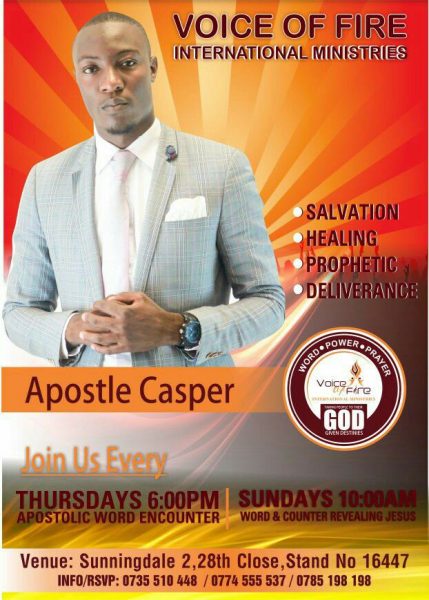 “I will come there and give you a beating like I did when we broke up.

“I married an older woman and didn’t listen to people when they advised me against such. You are 10 years older than me.

“You destroyed my Church Ministry and I let you do that but now I will not allow you to destroy the empire I am building” an angry Casper can be heard.

The angry pastor goes on to show off his collection of branded expensive whiskey’s and boasts about his drinking.

“You know I drink a lot and we used to drink together.” He said.