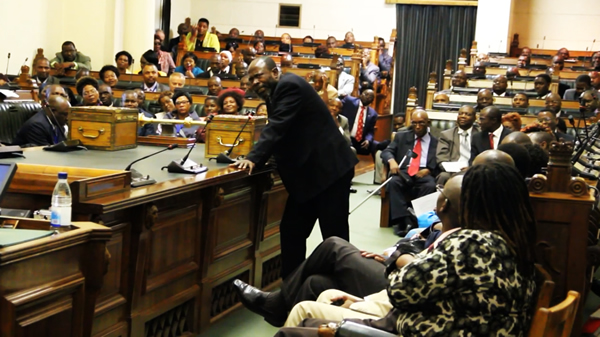 The row erupted while Justice Minister Ziyambi Ziyambi was on his feet during a debate on the Marriages Bill.

Chinotimba had taken a seat on the front benches, with the maize meal at his feet. Jasmine Toffa, an MDC proportional representation MP for Bulawayo, said she was “concerned that we are now bringing mealie-meal into Parliament like it is a supermarket.”

Deputy Speaker Tsitsi Gezi, who was in the chair, turned to Chinotimba and asked the MP: “Honourable Chinotimba, did you bring the mealie-meal?”

Chinotimba first addressed what he thought was the source of Toffa’s rage – a deliberate misspelling of Bulawayo, which is known to grate with Ndebele language speakers.

“My father is called Buruwayo, and I’ve branded the mealie-meal as Buruwayo. Bulawayo is spelt differently, so my company is called Buruwayo Milling Company, it is producing Buruwayo Roller Meal and I have brought to this House samples,” Chinotimba said.

Chinotimba told MPs that he had decided to assist his constituents “in giving them mealie-meal,” which is in short supply countrywide as millers hold out for better prices amid moves by the government to keep prices down.

Amid raucous scenes, Chinotimba added: “So, my point of privilege was that as Honourable Members, we should not just be mere Members of Parliament, so I’m going to give a 10kg bag of mealie-meal to the Honourable Speaker. I will also give the same to the Minister of Justice, Legal and Parliamentary Affairs, Honourable Ziyambi and the Clerk of Parliament, Mr. Chokuda. This is to show that this is what we do as we assist our people and they (other MPs) should also do the same.”

Gezi told Chinotimba he was well intentioned but was wrong to bring maize meal into the debating chamber.

“It’s true Honourable Chinotimba that we are all aware that mealie-meal is now a hard commodity to come by, but you should have gone to the Speaker’s office as well as the respective people’s offices that you have given this mealie-meal and not bringing it to this House,” she said.

“We’re so grateful that you’ve given us mealie-meal but in future, please take it to the respective people’s offices.”

Ziyambi thanked Chinotimba for the gift, before he was interrupted by Mabvuku-Tafara MP James Chidakwa who said Chinotimba had set a bad precedent.

“By the same token, I’m into the business of selling cellphones, so in future when I bring my phones here and give one to you, you should allow me to do so because precedence has been set by allowing Honourable Chinotimba to bring his mealie-meal into the chamber and distributing it to you and the others,” Chidakwa said.