Local gospel star Sabastian Magacha has been trending on social media for all the wrong reasons after his private bedroom photo was leaked onto the internet. In the picture which is going viral on social media, Magacha exposed his privates while having a video chat with a lady who has now been identified as his ex-lover Anesu.

In the leaked image, however, the lady’s face is not visible as it was crudely painted over using a mobile phone photo editor. 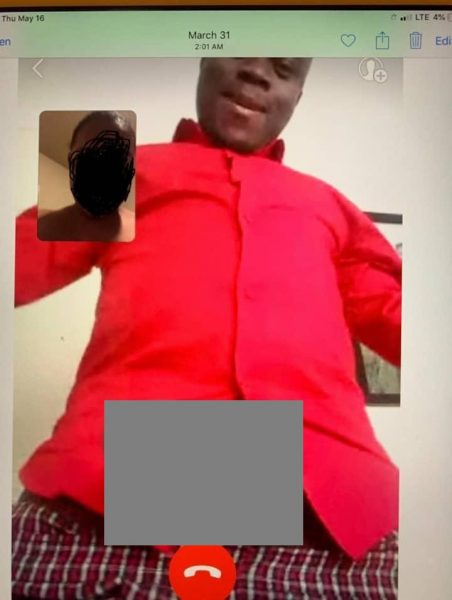 The photograph shocked many people especially the fans of the musician, who claimed that it was not in keeping with his pristine choir boy image. Magacha has produced many gospel hit songs over the years and notable ones include, Makaponesa mweya wangu and Ridza bhosvo.

Magacha’s ex-lover has claimed that the photograph was leaked online by her estranged husband, Lloyd Tevedzai who is also a gospel singer himself. Lloyd is based in Dallas, Texas in the United States of America. According to Anesu, she is the one who took the screenshot which shows Magacha exposing himself.

However, for some reason, she did not delete the image from her iCloud account even after the breakup of her relationship with Magacha. In her defence, she claimed that she had completely forgotten about the existence of the photograph.

Anesu, later on, started dating gospel musician Lloyd Tevedzai and eventually, the two of them got married. This is when she claims that Lloyd stumbled onto the photo which he would use as ammunition whenever the two got into a spat.

In a live streaming broadcast with social media personality Mai Titi, Anesu claims that Lloyd used to blackmail her over the picture and always threatened to expose her. She, in turn, would call his bluff and tell him to leak the image, because there was nothing shameful about it for her since it had been taken when the two of them were still dating.

It is not yet clear though, why Lloyd decided to leak the image at this particular point in time. Others have opined that perhaps he is trying to drum up publicity ahead of the release of a new album.

Saba’s ex-lover apologised to the musician for the debacle and said that he played no role in the events which unfolded.

You can watch part of Mai Titi’s chat with the ex-lover below: