The daughter of Covid-19 denier Oppah Muchinguri-Kashiri has revealed that she was “scared” after catching the virus.

Zimbabwe’s defence minister claimed in March – as the disease brought death and economic ruin in Europe and the United States before Zimbabwe had its first case – that the virus was God’s punishment on countries that imposed sanctions on Zimbabwe.

Her daughter Tanya Rozina Rushesha has now revealed that she feared she was going to die from the respiratory disease caused by the coronavirus.

“For you to be reading this you are either a friend or family member… I had Corona. I’m proud to say I have been cleared,” Tanya wrote on Facebook Tuesday night.

“I’m grateful to everyone who was there for me. I acted like a warrior but inside I was scared,” she added. 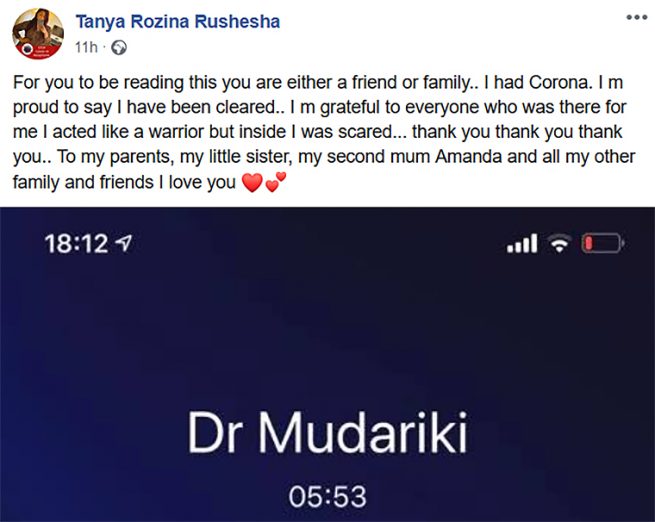 Tanya is Muchinguri-Kashiri’s child from her first marriage to Tapuwa Rushesha, with whom she had two children.

Muchinguri-Kashiri was condemned back in March and accused of undermining government messaging on Covid-19 prevention after claiming that it was a disease sent by God to punish western countries.

“The coronavirus is the work of God punishing countries that imposed sanctions on us,” Muchinguri told a Zanu PF meeting in Chinhoyi. “They’re now keeping indoors. Their economies are screaming, just like they did to ours. (Donald) Trump should know that he is not God.”

President Emmerson Mnangagwa’s spokesman George Charamba also claimed on Twitter that the coronavirus was a “disease of affluence.”

The first coronavirus case was reported in Zimbabwe just days later on March 20, and the virus had infected 2,817 and killed 40 on Tuesday.

Parliament was suspended this week after two MPs tested positive for the virus. On Wednesday, it was announced that agriculture minister Perrance Shiri had died from Covid-19.