Cape Town residents are in shock after a hearse carrying a body burst into flames outside Paarl on Saturday morning. The incident happened at about 8am when Willys & Gallico Funeral Services was transporting a body from the parlour to the family home.

The company released a statement in the afternoon on 5 December stating that the body together with driver were not affected by the fire but the vehicle was totally destroyed. It said it was also in shock about the incident. 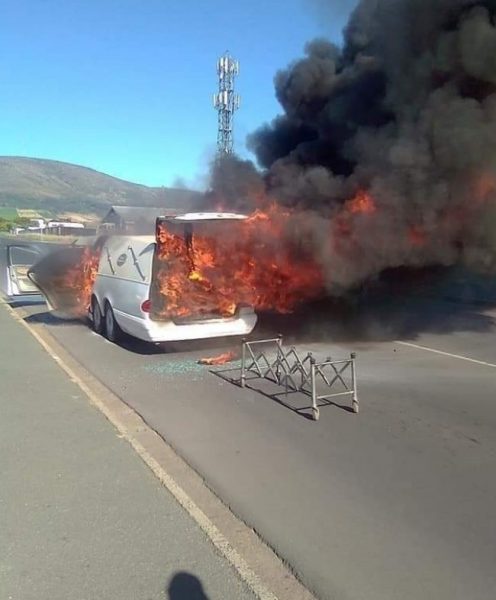 “It is with great shock and sadness that we at Willys & Gallico Funeral Services have to announce the tragedy that occurred this morning at about 8am where one of our hearses, CJ33190, spontaneously caught fire,” the company said in a statement released on its Facebook account.

It said its seasoned driver Brandon Fortuin was behind the steering wheel when the incident happened and that its cars had been serviced.

“The incident occurred while one of our experienced drivers, Brandon Fortuin, was on his way to drop a body at one of our loyal families to pay their final respects. The vehicle has been destroyed. However, we can confirm that the driver and the body were unharmed. The family still had the opportunity to fully view the body in order to prove this,” said the statement.

The residents from Paarl who spoke to the SunTeam said they were in shock about the incident.

“I have never heard of such since I was born. At least the body was not cremated in the fire. This is shocking and the family would have been terrified. This is a scary situation. At least the family managed to view the body at the end,” said Mkhululi Zenzile from Mbwekweni near Paarl.

The company sent its condolences to the family affected. It said it would investigate what could have happened for the hearse to burn down.

“We would also like to assure our community that Willys & Gallico Funeral Services will investigate the cause of this inexplicable incident,” it said.

Derick Damons from the fire and rescue department of the Drakenstein Municipality confirmed that the firefighters responded to the incident.