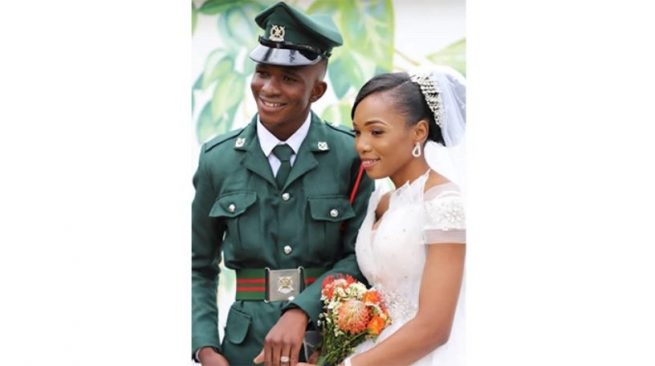 A BAYONET fixed on a rifle was used to cut the wedding cake that was adorned with the Zimbabwe Defence Forces badge and the national flag.

The wedding came as an early Independence Day celebration for the Nkomo and Ncube families on Saturday.

A soldier, Artwell Nkomo (27) the first son of the late Mr Nephat Nkomo and the late Mrs Sibusiso Ncube of Matshetsheni Village in Gwanda and his sweetheart Ntombizile Ncube (24) the first daughter of the late Mr Patrick Ncube and Mrs Helen Sibanda of Mleja Village, Filabusi tied the note in style at White Rose Gardens in Luveve Four suburb with full military honour.

It was a military wedding and the bride and the groom’s vehicles were escorted from Cowdray Park suburb where the couple lives, to the venue in Luveve by 13 soldiers as well as 14 civilians.

The military band which provided music and entertainment did not disappoint.

The best man was from the Zimbabwe Prisons and Correctional Service Shingai Zishiri.

The cake cutting, exchanging of vows and the signing ceremony were all conducted under an arc of rifles.

To welcome the newly wedded wife was corporal Chipanje who was the Guard commander.

She was eloquent when she outlined all the duties of a soldier.

“We welcome you Makoti to the military family. This man you just got married to is a soldier. Soldiers are responsible for safeguarding the territorial integrity and the sovereignty of Zimbabwe among other duties. At one point he may be called in the middle of the night for assignments. What we assure you is he will come back at the end of the assignment,” she said.

Captain Shakespeare Tele said one needs to have served the army for more than three years to be considered for a military wedding.

He said soldiers are human beings drawn from society and in most cases have emerged to be the best fathers and husbands to their families due to what they are taught to do by responsible departments at work.

The newly wedded Mrs Nkomo shed tears of joy as she explained how happy she was to be joined in holy matrimony.

“I’m so thankful for the army and my husband for this honour. To me, these are rare moments,” she said.