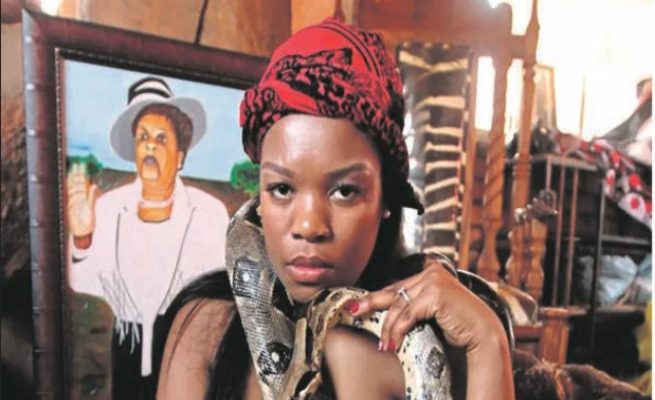 NAKED HEALER Malepona is being threatened by a scammer who promises to sell snakes to clients.

Now Malepona wants Mzansi to see her with her snake and show that her reptile is not for sale.

“I don’t work like that. If I sell my snake, how will I treat my clients?’ she said.

Traditional healer Malepona, who is known for treating her patients while nak_ed, said she’s being targeted by scammers.

She said a scammer who claims to come from Umhlabuyalingana in KZN is using her photo on his profile.

He’s allegedly telling unsuspecting victims to deposit R250 or even more into his account and he’ll send them snakes to make them rich.

Malepona said this was affecting her business as victims wanted their money back and were claiming it from her.

Malepona from Winterveld, Tshwane now wants to clear her name.

“I want to pose with my snake so people can see who the real Malepona is,” she said.

“The photo is my old photo which the scammer copied from a Daily Sun article published years ago,” she said.

“It was at the time I was taking over the ndumba from my late grandmother.”

Malepona took over from her grandmother Mirriam Malepona Mate, who died in 2014 at the age of 70.

“I’m continuing with her legacy and my grandmother was conducting her business with honesty and so do I. But now there’s an individual who wants to ruin our reputations.”

She said she has heard some of the conversations this scammer has in her name with unsuspecting victims.

“I don’t operate that way,” she said.

“I don’t take money from people and promise things that are not there. If I give people my snake when they come to me, what will I use?”

She said she wants people to know the real her.

“My grandmother worked hard to build her customer base with honesty. I’m continuing with the legacy and I’m not going to allow anyone to ruin it.”

Byron Kennedy of Vodacom said they’ll have to investigate if the number was cloned or the person got it from Vodacom.

“But if the user is scamming people, we will have to blacklist the number,” said Kennedy.

She urged Malepona to open a fraud case.