In the video that is currently circulating on social media, Mai TT prayed against ‘haters.’

Social media was plunged into a frenzy after socialite Joey Nyikadzino posted a picture of herself standing in front of a car that is similar to Mai TT’s.

She captioned the picture:

Never re-friend a person that has tried to destroy you once. A snake only shed its skin to become a bigger snake. 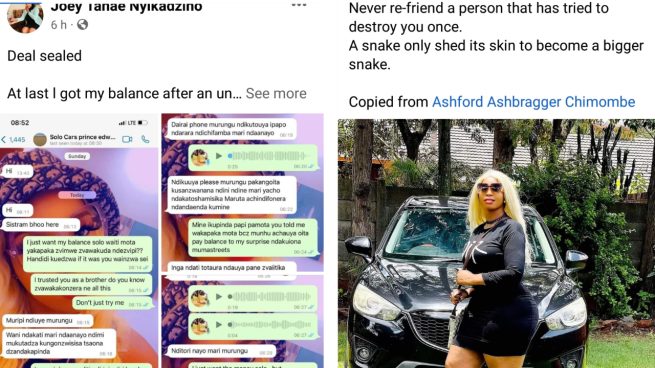 She faced criticism from social media users who accused her of intending to show off that her car looks like Mai TT’s car.

One of the responses came from Mai Sean na Bobo who wrote:

“But pa fair wanga uchida kuti tione kuti mota yako yakafanana neyamai tt ummmm ddnt expect that from u u are better than that.”

Nyikadzino had to defend herself and said she once posted pictures of the car before.

Following the drama, a car dealer by the name Jonathan Matewo, who was dragged into the issues, took to his Facebook page and wrote:

Waking up to some b/s tags on fb, l feel like i have to clear the air on this one. I imported the Mazda CX5 from Japan on behalf of Joey Nyikadzino. What happened after that is non of my damn business.

Nyikadzino has since taken to her Facebook page and announced that she has sealed a deal with a local car sale. She also congratulated the new owner of the car.

At last, l got my balance after an unnecessary drama. As l always say l am not on social media to make adversaries. Peace is something l value a lot in life. I am too busy to deal with litigations or mental issues simply because of social media. I won’t seek any validation or confront anyone because the money has been paid.

Congratulations to the new owner the rest is noise 👏