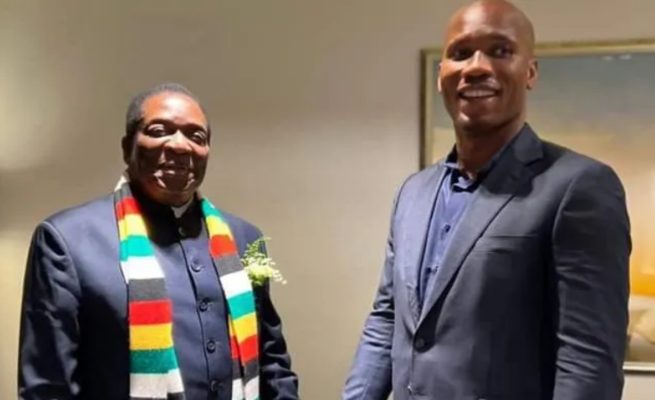 Mnangagwa and the once sensational football star are both attending the Africa Green Revolution Forum 2022, an annual nature conservative summit, in Kigali.

Posting on his Twitter handle Monday, Mnangagwa described the one time fierce striker as a true African hero.

“A true African hero – thank you my brother @didierdrogba,” Mnangagwa said, after taking few images with the two-time African footballer of the year.

There were no details of the two’s meeting.

Mnangagwa, viewed as a human rights abuser in his country, has taken advantage of the international profile enjoyed by the much loved European football celebrities to try and spruce up his image.

Back home, he has had meetings with Zimbabwean football exports plying their trade in Europe’s most prestigious leagues.

These include Marvelous Nakamba who plays for English premiership side Aston Villa and Tino Kadewere, who was playing for Olympique Lyon in France and has since moved to Spanish side Real Mallorca.