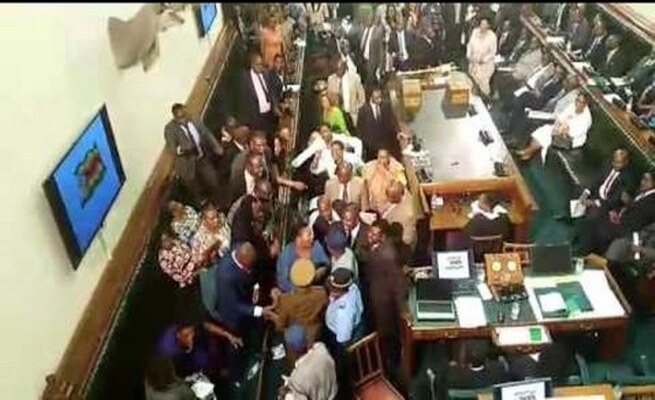 THERE was chaos in Parliament yesterday with legislators almost exchanging blows after Home Affairs minister Kazembe Kazembe claimed that reports of political violence were “lies”.

In response Kazembe said: “The President is on record denouncing political violence. As such the police and I have said that nobody is above the law. The police do not act on social media and drama.”

They invited Toffa, whose hand was in a sling, to stand up.

“Social media drama? Honourable Toffa is in the House, she was battered, look at her and she is a woman!” one MP shouted.

But Kazembe laughed at the opposition MPs who were demanding answers.

The volatile situation was diffused by Speaker of National Assembly Jacob Mudenda who said Kazembe should issue a ministerial statement on political violence.

“The minister has agreed to bring a detailed ministerial statement explaining everything,” Mudenda said.

Another MP later told NewsDay that it was ironic that Kazembe should claim that the police do not act on social media reports when the State relied on a video posted on social media to build a case against opposition MPs Job Sikhala and Godfrey Sithole for alleged incitement to violence.