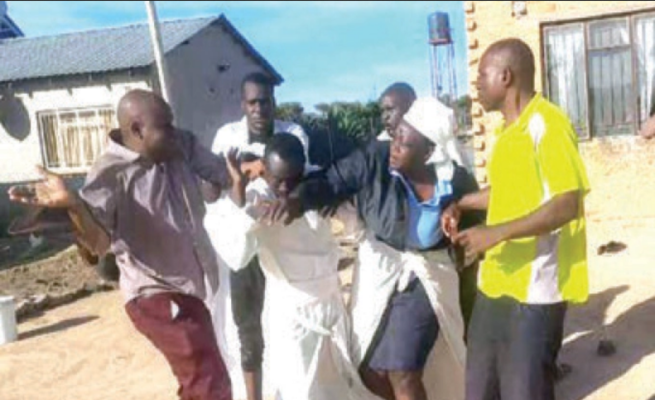 A SELF-STYLED prophet was bashed for giving a false prophecy meant to divide a family in Ushewokunze, Harare South.

In a video doing the rounds in some WhatsApp groups, Shepherd is seen giving the Madzibaba a thorough beating.

Shepherd punched and kicked the prophet.

The prophet was saved from further damage by Shepherd’s sister, Tsungai Karimanzira.

Tsungai consulted the Madzibaba and he told her to instruct her brothers to respect her son, saying their late father’s spirit was manifesting in him.

Shepherd could not stomach the prophecy arguing that his ancestors could not manifest in his brother-in-law’s son, according to Shona culture.

He then paid Madzibaba a visit and bashed him.

“You have caused discord in our family because of your false prophecies.

“I want you to report to the police that I beat you up if you are innocent.

“You want me to bow to my nephew. Never, I will not accept such lies,” Shepherd told the battered prophet.

Tsungai is seen with members of the Karimanzira family trying to restrain the enraged Shepherd from further attacking Madzibaba.

Tsungai refused to entertain H-Metro and referred questions to people who leaked the video.

“Who gave you my number? Pedzerwai naye munhu iyeye,” she said.

In the video, Shepherd is heard saying: “He is saying my father is manifesting in the child, mwana wemutorwa mwana wemukwasha, he is disrespecting my father.

“Does that make sense?

“If he can prove it, let him go to the police and report me for beating him up,” explained Shepherd to a neighbour.

Shepherd promised to beat up Madzibaba whenever he meets him until he reports to the police.