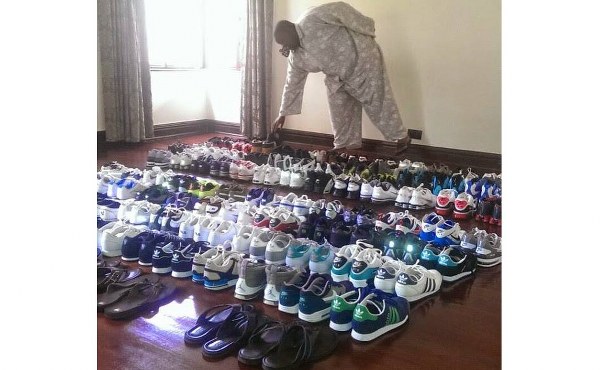 Flashy “businessman” Wicknell Chivayo who is under attack for failing to provide justification of payment and use of the money he received for a government project, has remained defiant, flaunting a box of money, pictured, on Instagram.

Among other things, Chivayo is being accused of diverting part of the $5 million he got for the construction of a 100MW solar plant in Gwanda to fund his lifestyle.

Top of the list Chivayo gloats about are designer shoes and watches and just parading cash.

In this instance, Chivayo posted a box with about 16 bricks of R100 notes stacked in a box.

The businessman did not say anything but showed his hand touching the money, to prove that the picture is just not an Internet download.

Sir Wicknell, as he calls himself, seems to have accelerated his flossing rate even bragging that as long as you are in Zanu PF, you have the chance to access funds.

Earlier on, he was claiming on the same Instagram platform that he has a new pair of shoes every day.

Chivayo recently appeared before the parliamentary portfolio committee on Mines chaired by Norton legislator Temba Mliswa, that quizzed him over the controversial $5 million payment.

A follow-up visit to the site revealed that there had not been any substantive progress on the land, save for two shacks several months after the payment.

After the visit he, however, started taking action, clearing the land to make way for the project.

But with all the criticism and attacks, Chivayo has remained unapologetic, posting highly priced shoes that he would have purchased.

In one of his posts, he said Zimbabweans were just a jealous bunch, which is why he secured American citizenship for his son.

In another story on Instagram, the flashy businessman showed off his son John Chenjera Chivayo’s American passport after he had landed in Zimbabwe after being born in the United States.

Chivayo was forced to prove the paternity of his son John Chenjera, following allegations from social media that the child was not his.