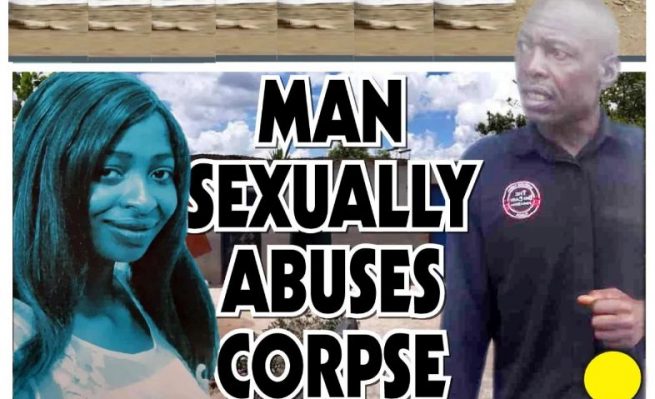 In a bizarre incident, an Epworth man se_xually abused a corpse to quench his five-year love obsession for the deceased.

Bigie ‘Bigman’ Sipiliano, 51, and his two other friends stormed the Mazhindu homestead in Maguta Extension moments after the deceased Mellisa Mazhindu collapsed and died on New Year’s Day.

Mellisa, who was preparing to visit her sister, collapsed and died at Chiota Shopping Centre, in Maguta Extension, Epworth.

The corpse was still covered in a white cloth when Bigman and crew claimed they had some unfinished business with the deceased and wanted to have one last moment with her before she was handed to the police, according to the deceased’s mother, Phillipa Mazhindu, Bigman violated her daughter’s body before he attempted to extend the abuse to her and her other daughter.

“I was in the middle of mourning when Bigie and his friends came into my house soon after my daughter had died.

“They were holding beer in their hands, smoking weed and looked drunk; this was my first time seeing them too.

“Bigie, who was doing all the talking, went on to vandalise our door shouting obscenities.

“He said they had come on a mission and they had to fulfil their purpose or else there would be no peace.

Mazhindu said she was confused between mourning her daughter and attending Bigie’s actions. “I was deeply heartbroken with what they were doing and remained silent because of my grief.

“The three ordered us to close our eyes and forced us to sleep, warning us that they would have ana_l se_x with any-one who would not follow instructions.

“Bigie then stood up, saying his manhood had been erected; he went towards Mellisa’s corpse, uncovered it and laid on top of it before mimicking se_xual moves.

“I then made a loud scream at our neighbours’ attention; the other two retaliated but Bigie came towards me and my daughter and he f0ndled my breasts and cuddled my daughter,” she said.

Mazhindu claimed she was saved by her neighbours. “After hearing my screams, neighbours quickly gathered outside and one of them dragged Bigie outside where a scuffle ensued.

“Bigie continued, shouting that whether he was being beaten by the mob, he had already achieved his mission.

“He continued in loud voices and screamed like he was possessed by some spirit rolling himself on the ground and mimicking the same se_xual act he did on the corpse to the ground,” she said.

She added; “I failed to take in all the drama so I was told I fainted and had to be taken to another room where I received attention.”

After the drama Bigie allegedly fled the scene, police were informed of the girl’s death and Mellisa’s corpse was handed over to a local funeral parlour.

However, Bigie is believed to have gone ahead and mobilised more friends and a group of pr0stitutes who claimed they knew the deceased.

The crew went on to cause another scene and stopped Mazhindu’s church members from leading the funeral procession. Mellisa was later buried on Sunday at Zinyengere Cemetery in Epworth.

Prior to her demise, Mellisa was a resident in the Avenues area where her mother claimed she was working as a bar lady.

Police yesterday confirmed Bigie’s arrest, saying he was soon to appear in court. He is being charged with violating corpses as defined in section 111 of the Criminal Law (Codification and Reform) Act, Chapter 9:23.