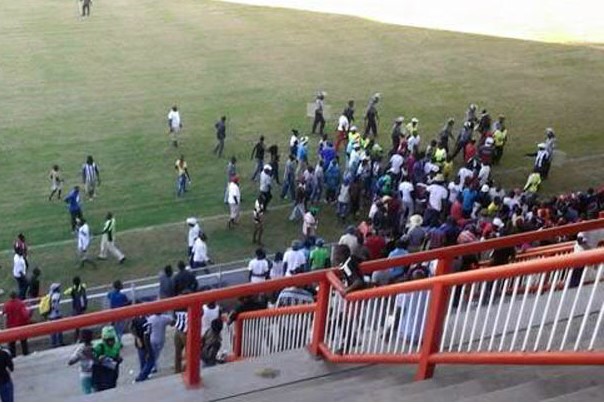 AN allegedly drunk Highlanders Football Club fan is battling for life in the intensive care unit after he fell from the terraces during a match between the Bulawayo giants and Shabanie Mine on Sunday.

Police said it is not yet known where Mr Prince Ncube (49) resides as he cannot speak.

They got his name from his national identity card which he was carrying.

He fell from the highest point of the rail poles that divide the sitting bays in Barbourfields Stadium and sustained serious body injuries.

Mr Ncube fell towards half time of the match and was rushed to Mpilo Central hospital where he is admitted.

“We are investigating the matter and right now we only know his name. We are still trying to establish what caused the incident but it is alleged the soccer fan was drunk,” she said.

Bosso who are on a roll, rekindling memories of the formidable side of the late 90s and beginning of the century are still to be beaten this season in the league’s first seven games. Riding on their form the 2006 champions have managed to draw huge crowds at their home matches and last week the fans heeded the #fillupBF# call by the Bosso executive as the stadium was almost filled to the rafters.

Meanwhile, police strongly warned members of the public to desist from smuggling alcohol and dangerous weapons into the stadium.

“We warn members to the public to desist from smuggling alcohol as police will not rest until the habit is stopped. People behave rowdily when under the influence of alcohol, disturbing other spectators in the stadiums,” said Insp Simango.