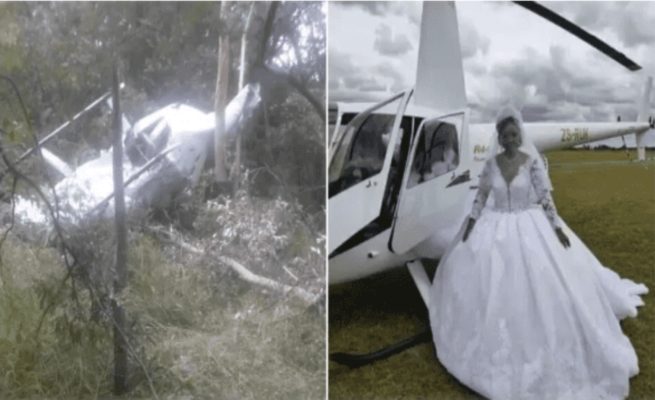 The helicopter that carried comedienne Mai TT to her wedding venue in Chisipite, Harare over the weekend went down in Mhondoro.

The helicopter, reportedly crashed on Sunday near Chibhero College in Mhondoro. The pilot was alone when the plane crashed. He died on spot.

This was confirmed by mai TT on her Facebook page. She said, “Just this morning people calling me saying your Pilot crashed and passed away soon after dropping me , I’m thinking it’s just false rumors 😭😭😭😭.

“I’m calling the owner of the Helicopters I booked from he confirmed it’s true he crashed and died the next day on Sunday as he was coming from piking up another client 😭😭😭😭.

“I don’t know him I just booked for Chikopokopo services and when I went on board he opened the door for me saluted and said I’m honored to be taking you to your big day 😭😭😭😭😭.

“Becky called the same time and said can you delay coming to the venue with 20 minutes and he said no ma’am I got to take you now because a dark cloud is coming 😭😭😭❤️was this the dark cloud he meant?? I’m traumatized right now .

“My brother I don’t know what to say, may your soul Rest In Peace and thank you even if I don’t kno you personally for the hospitality you gave me those few minutes I knew you 😭😭😭😭😭. 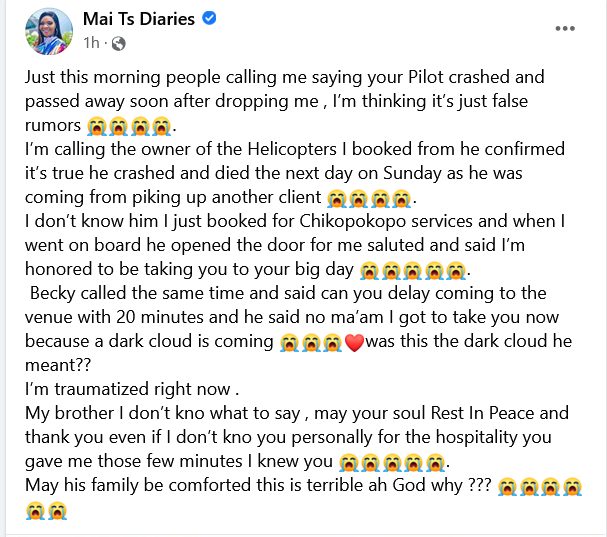 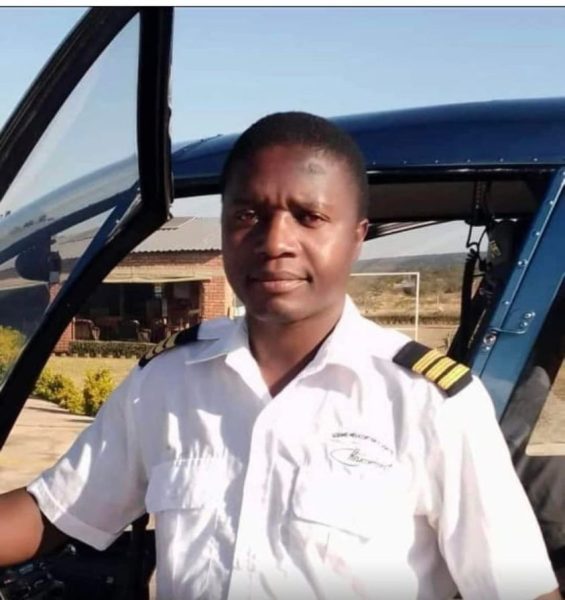 Military and police details also cordoned off the site, making it inaccessible.

The sources said the crash took place in the area where a helicopter carrying President Emmerson Mnangagwa was forced to crash land after developing a technical fault while he was returning to the capital from his Precabe Farm in Kwekwe.

“The crash was in the same area where Mnangagwa’s helicopter almost crashed,” the source said.

“The road leading to the accident scene was cordoned off, and no one was allowed there. We are not yet aware who was involved in the accident, and if there were any casualties.”

Zimbabwe National Army spokesperson Colonel Alphios Makotore said he could not comment on the matter.

“I am not in the air force, I am in the army,” he curtly said yesterday.

AFZ public relations officer, Simon Matingwina yesterday acknowledged the crash but said it was not an air force helicopter.

“I know about the crash, but it’s not our helicopter. I think Mhondoro police attended the scene,” he said last night.