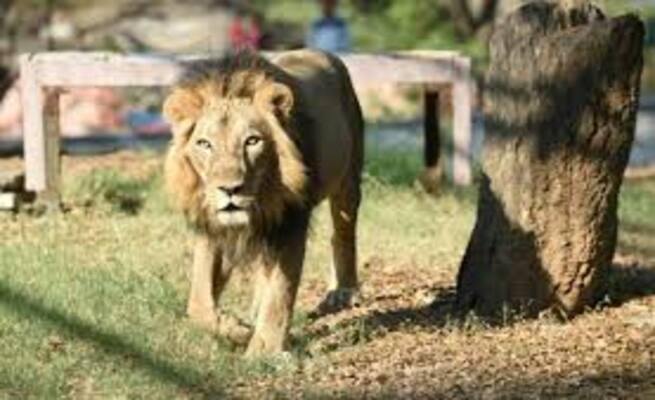 There was pandemonium in Kariba yesterday when a couple that was making love in a bush reportedly got attacked by a seemingly ‘jealous’ lion.

According to sources who spoke to My Zimbabwe yesterday, the unidentified man and his alleged girlfriend, identified as Sharai Mawera, were reportedly being intimate in a bushy area situated in Mahombekombe suburb when a lion pounced at them.

“Unfortunately the woman, who was also known as Mai Desire, was mauled to death by the lion but her boyfriend managed to escape naked and he was only wearing a condom. The two were having their quality time near Mahombekombe Primary School,” said a reliable source.

After realising the presence of the deadly wild animal in the midst of their alleged love nest, the survivor who was nude is said to have escaped for dear life while leaving his female counterpart behind.

Another source who claimed to know the two very well told My Zimbabwe news crew that the man was naked since it was very hot.

“He is a fisherman and he used to meet so often at the same spot with his girlfriend who is now deceased. The unidentified man was naked since it was hot. His girlfriend, Sharai, was a vendor and the two were romping when the incident occurred. In fact they they were ‘doing it’ sideways. The lion came from behind and roared. The guy managed to escape before stopping at a distant where he witnessed his companion being attacked. He latter rushed to the road seeking for help,” said another highly placed source.

The man is said to have been ignored by motorists and some members of the public who initially thought he was mentally challenged since he was reportedly naked.

“Later on people heard his plea and accompanied him to police where he reported the matter. Cops and officers from Zimbabwe Parks and Wildlife Management Authority attended the scene and fired a single shot before getting to the spot. The woman had been already been killed. She had bloody bruises all over her body. Her neck and tummy had been mauled,” another source narrated to My Zimbabwe.

Members of an apostolic sect who worship near the area where the tragedy occurred reportedly took to their heels amid claims that they saw 7 lions in the area.

Meanwhile, at around 10am, remains of another man who is yet to be identified were also discovered near ZESA social club. My Zimbabwe is reliably informed that the unidentified man was attacked and killed by lions the day before yesterday and residents of the town are now living in fear since the lions are still roaming freely as there are yet to be caught.

There were also reports that another Kariba man only identified as Musinje was attacked to death by lions while coming from a Night Club this week. His remains are said to have been found yesterday at 6pm together with an empty scud container (opaque beer) that he was carrying when he got fatally mauled by vicious lions.  Source: My Zimbabwe