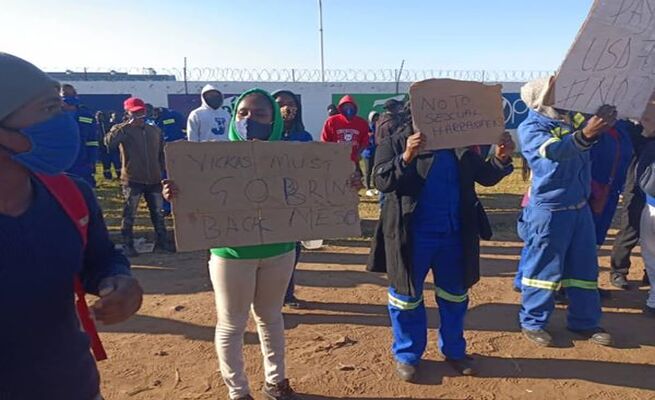 The workers made a series of allegations against their employers who they accused of paying expatriates in hard currency while the locals were paid “pitiful salaries” in local currency.

Disgruntled workers besieged the company premises yesterday waving placards inscribed No selective payment of USD to expatriates, End racism, Black lives matter, No to racism, No to unfair dismissals, No to se_xual harassment and We are not slaves”.

The plant was officially commissioned by President Emmerson Mnangagwa in July 2018.

“We have suffered enough from this Indian investor,” the workers said.

“Let’s join hands comrades and bring up change. We say enough is enough.”

The workers alleged cases of unfair dismissal, racism and se_xual harassment among other ills.

Female protestor alleged that the Indian managers often entered locker rooms for women while they were nak_ed and se_xually harassed them, and that efforts to seek redress had failed.

She said: “There is one lady who got fired when she spoke out after being se_xually harassed. As we speak, she can testify for her. Indians are the perpetrators of these crimes and they cover up the cases or dismiss them if they are brought to their attention. The human resources department and some black managers are powerless and remain silent,” adding that, promised investigations never materialised even though evidence would have been recorded on camera.

A male employee, who refused to be named, said: “We are gathered against unfair treatment here at Varun Beverages, especially se_xual harassment against ladies here present. Then we have the issue of salaries, these Indians are getting paid in US dollars, while we get bond. We also want US dollars or equivalent.”

“We also don’t have off days. They told us to choose a representative to channel our grievances and we chose one, but they terminated his contract. We will not return to work until our representative has been reinstated. There is racism, we are being called names. Vickus Chandra must change or go down.”

Another protestor said racism was rampant at the company.

“They are using it as a tool for managing people. We have serious cases of se_xual harassment, but there is victimisation of the victims. Unfair labour practice and summary dismissal of employees is also nagging workers. We dialogued with them and agreed that there will be no contract termination for disgruntled employees but they reneged on that.”

In a statement, the workers said: “The Indians at VBZL are exercising gross human rights violations, several workers are prepared to come forward and testify against a bucket-load of ongoing incidents, especially from managers. It’s disheartening to realise that VBZL has become the architect of economic slavery in Zimbabwe.

“These issues highlighted are of deep concern as signified by emerging trends of abuse, racism, economic and social victimisation of Zimbabweans at foreign owned companies in particular VBZL.

“The Indians view themselves as ‘warlords’, using intimidating techniques and extremely abusive language at plant workers and employing autocratic and military-style tactics to run a beverage manufacturing company. At this rate, if let to go scot-free, a tragic case (similar to the one involving a purported Chinese investor and two Zimbabwean workers) can be experienced at the company.”

The protests came a week after similar protests at an lndian plastic manufacturing company and the shooting of two employees by a Chinese employer in Gweru.

The Zimbabwe Congress of Trade Union confirmed the crisis at the company with the union’s secretary-general Japhet Moyo saying: “The majority if not all the workers are on fixed time contracts at the moment. Issues of unfair labour practices are very prevalent. As a federation, we don’t condone unfair labour practices of any kind whether these are done by Chinese, Indians or local investors. Our laws are there to protect our citizens from any unfair labour practices regardless of where the investor comes from.

“Our message to all investors is that it is unlawful to practise segregation, exploitation or any unlawful conduct.

“We expect the National Employment Council in the beverages industry to enforce our industrial relations standards as provided in their collective bargaining agreements.”