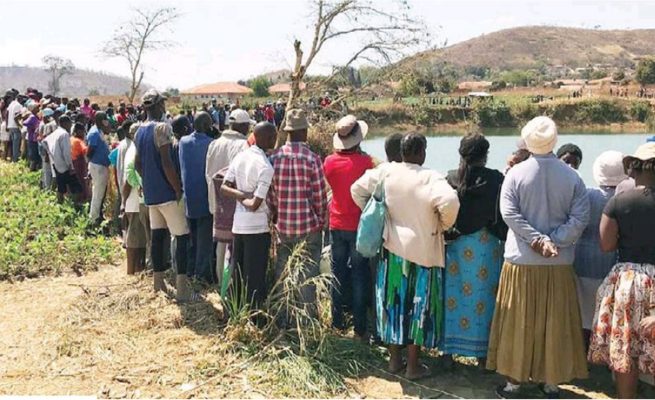 A self-proclaimed healer drowned during a cleansing ceremony in Kambuzuma at the infamous Blue Dam on Tuesday.

The woman only identified as Mai Tino reportedly resided in Kambuzuma Section 5 and had gone to the Blue Dam to perform a cleansing ceremony on some girls seeking “spiritual intervention”.

It is reported, by onlookers, that when they got there, one of the girls was seemingly possessed and rushed into the water where she started sinking and the healer drowned while trying to save the girl.

Speaking to H-Metro, one of the witnesses said, “The woman who drowned came with two girls intending to have a cleansing ceremony but when they got here one of the girls acted as if she was in a trance and fell into the water.

“She started speaking English which the healer didn’t understand so the healer tried to get the girl out of the water.

“The girl started drowning and ‘came out of the trance’ and tried to rescue the healer but she was overpowered by the water.

“She left the dam to look for assistance, upon return they managed to take her out of the water but it was too late.

“They went on to call the police who then escorted them to the healer’s place of residence,” he said.

It’s alleged that the two girls had travelled from Mufakose seeking spiritual intervention which later led to the death of the healer.

This is not the first time people have drowned in the infamous dam that is between Warren Park and Kambuzuma.

Towards the end of last year, a fifteen year-old boy drowned in the dam while swimming and the recovery of his body was marred with controversy as some claimed that he had survived over 48 hours underwater but passed away because the Sub Aqua team had gotten into the water (to retrieve the body) while he was still going through rituals with mermaids.

A resident who grew up in Kambuzuma said she grew up hearing tales about mermaids in the Blue Dam.

“We grew up hearing that there are mermaids in the blue dam. Residents of Warren Park and Kambuzuma know these tales of mermaids in Blue Dam. Our elders used to tell us stories of people who were taken by water creatures and returned as mediums, so we never went there.

“These are stories we were told sekungoti Nyangani mountains dzinoyera you never know the real truth,” she said.

Another resident said in 1998 when he was in grade six, a boy who was a year older fell into the dam and died because his mother ‘mourned him before the mermaids had returned him.’

“When I was in grade six back in 1998, I remember a boy who was in grade seven who used to play near the dam selling freezits and it was said that a great wind blew him into the dam and when his mother was told, she mourned him before he was returned and he died in there,” he said.