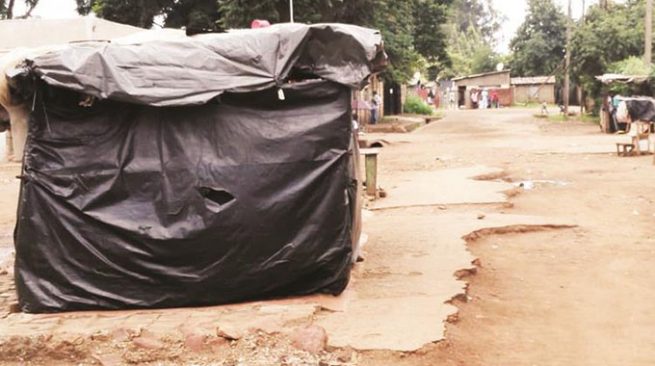 A tuckshop has been built in the middle of a tarred road in Harare’s Dzivaresekwa 3 with the structure having a slab and poles in a blatant disregard of city by-laws and no attempt by council staff to stop the work as it started or get rid of it once it was built.

The structure is located a stone’s throw from a council-owned beerhall and the busy Dzivaresekwa 3 shopping centre which is within the eyesight of council workers.

Our news crew yesterday visited the site and observed motorists having a difficult time trying to navigate past the illegal structure and potholes littering the area. The tuckshop was manned by a young woman who was selling her products with ease.

A local resident who declined to be identified said it was worrying that such developments were taking place under the watch of council.

“The city is slowly being turned into a rural area by corrupt council officials. How can someone be permitted to erect a tuckshop in the middle of the road?” said the resident.

“What is worrying is that council employees use this road regularly when going to the beerhall, but are failing to take corrective action. The MDC must just admit that it has failed to run the council.”

“Unfortunately, our town planning offices are closed because of Covid-19 regulations so we cannot check some of the developments,” he said.

Chaos has now become common in almost all the MDC-Alliance-led local authorities as more illegal structures are sprouting up at undesignated spaces.

Residents in Chitungwiza recently protested the move by council to allocate a commercial stand at Try Again shops in Unit N.

In the same area, the local authority also allocated a residential stand in the middle of a road.